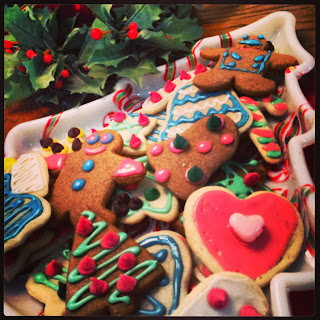 Rick, myself, and Nichelle went to a musical performance put on by the local church last night. When we got home, Nicole and the boys were baking sugar and gingerbread cookies. That was a nice surprise, especially since I've put off baking them for so long. We waited until this morning to get them decorated. Now we have two big plates full of Christmas cookies.

I hope you all have a wonderful Christmas! 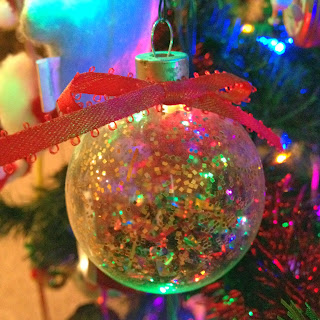 I'm not that great of a photographer. I do it for fun. The majority of time I have no clue what I'm doing. I can only imagine what I might accomplish if I knew how to work my camera well. Regardless, people still tell me they like my pictures, which I love hearing. The fun part for me is editing a picture to make it look better than the original. I do this a lot, especially on Instagram. I love playing with the filters, cropping, and even using the contrast effects. Above is a picture of an ornament filled with glitter that my girls made years ago. One of my photo challenges yesterday was "Sparkly", so I took the above picture. Then I turned it into this one ... 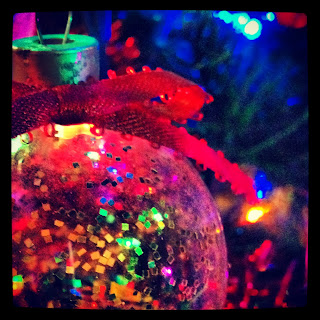 The picture below was taken out of the car window as Rick and I sat at the stop light. I didn't even have the window down for this one. 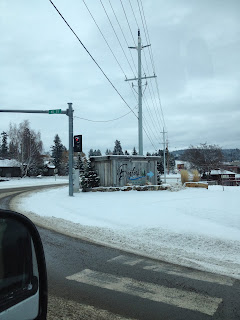 I cropped it, changed the filter, added a frame, used the contrast effect, and I got this ... 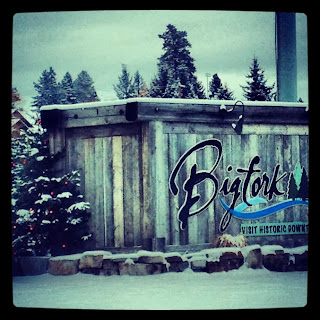 I do the same thing with stupid-selfies too. I took this one yesterday right before Rick and I left the house to finish up our Christmas shopping. Notice the look of enthusiasm. Haha! 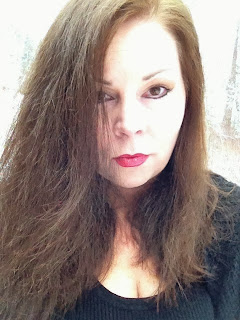 Again, cropping makes a huge difference, as do filters, frames, and so forth. I've posted about WYSIWYG before. That stands for "what you see is what you get". We live in such a high-tech world nowadays that most of what we see isn't really what we get. I don't know about you, but to me, it's fun to be able to tweak photographs so quickly and so easily. It's not really about taking that perfect picture. It's more about knowing how to take a crappy picture and make it into something better. 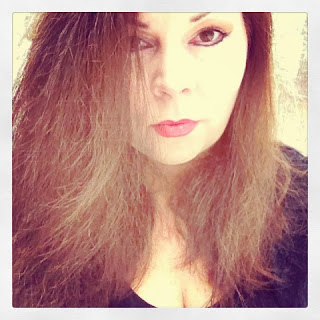 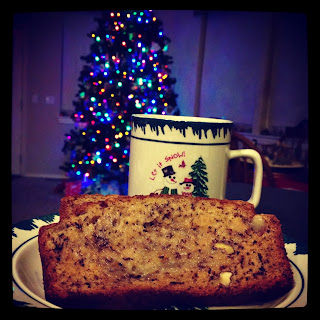 I baked some Banana Nut Bread yesterday. I had some bananas frozen that I needed to use, so now seemed as good a time as ever. I don't make it too often, which is silly because I really like it a lot, especially smeared with butter. That's why it looks a little wet in this picture. I probably should have waited to put the butter on until after the photo, but I was thinking more with my stomach. I don't know who posted the recipe. I found it on Instagram, and I took a screen shot of it, but I didn't catch the name of the person in the picture. The recipe is below if you're looking for one to try. Click on it to make it bigger. 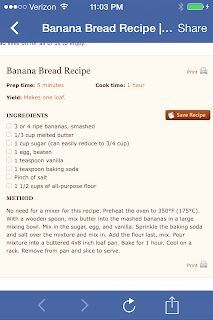 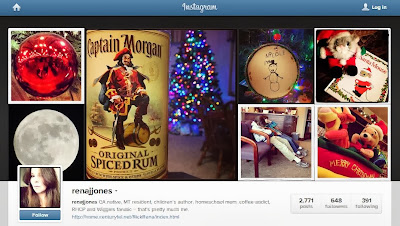 A few days ago I watched a video clip called The Agony of Instagram. Click on the link if you want to watch it for yourself. It's basically another story about social media envy, which we've all heard many times over. This time they're saying it's not from Facebook or Twitter, but from Instagram. That caught my attention because I am fairly new to Instagram. I was very much a late-comer to that site, and I didn't join until a long time after most of my friends did. However, being the photo-freak I am, I quickly passed up most of my friends in posting. As you can see above, I've put up 2,771 pictures. I'm sure that number will be higher by the time you actually read this blog. I kind of like taking photographs ... well, duh.

The video talks about people being jealous when it comes to seeing friends posting particularly good pictures of family photos, dinner spreads, etc. Do you feel that way? I don't. I'm not jealous of anyone's photos. Well, maybe when I see the lead singer of the Red Hot Chili Peppers with his way-to-young-for-him model girlfriend ... but that's another story. I love seeing people's photos, and it doesn't matter if they're perfect or not. The ones that are perfect looking just impress me. I'm more like, "Dang, that's a great shot!" If anything, it makes me want to try harder to improve my own photography skills — not make me jealous thinking my friends are better photographers or that they have nicer things. And besides, what's nice to one might not be as nice to another. I have friends with beautifully decorated Christmas trees with antique ornaments. Mine is filled with kids' crafts. I saw friends post gorgeous Thanksgiving tables with exquisite, fine china. Mine had paper plates and pine cone turkeys. What IS perfect anyway?

Not everyone feels the same way. I'm sure there is a huge percentage of people on Instagram who aren't into photography at all. I'd bet there are many who just like snapping a quick picture and posting it. There are the professionals though, and each image they post is a work of art. I see a lot of those, but I'm not jealous, I'm more often impressed. Photography is just as much of an art-form as it is a skill. Most photographers take dozens of photographs just to get one they're satisfied with. I certainly wouldn't call myself a photographer in any professional sense of the word — it's a hobby for me. I joke and call myself an Indoor Wildlife Photographer because some of my best shots are taken from inside the house through a dirty window. Others are taken from the passenger seat of our car while we're driving 70mph. The trick is editing them to make them look cool. Like any other photographer, I often take many pictures just to get one that I'll post. The same goes for "selfies" (I hate that word), and often times I take dozens before I get one I'm actually willing to put up. Do I use filters to make them look better? Of course. Who wouldn't want to look like they have perfect skin over a bunch of freckles?

The video talks about FOMO, which stands for the Fear Of Missing Out. Just the fact that someone is being paid to study this makes my head spin. It makes me wonder where the money came from — tax-payers, probably. It's interesting how they say young men are the most affected by FOMO, but the guy doing the study doesn't really know why. I did like how the co-founder of Flickr said, "Social software is both the creator and the cure of FOMO. It's cyclical." I thought that was a very interesting comment, and certainly a much glass-half-full way of seeing things, verses the Oxford study that focused only on the negative.

I've had people tell me things about my pictures, such as how great my hair looks. Yeah, it did for that one particular shot, which is why I posted that one. Or, how nice and clean my house looks. I'm not a neat-freak, but I certainly won't post a photograph of my living room when it's trashed, which is usually is. Or, how perfect looking my Christmas tree is. Lighting, angles, and filters are wonderful things, aren't they? So, this whole jealousy thing is silly to me. Maybe it's not to others, but it is to me. What might look like a "perfect photo" to one person usually isn't. Some people just try harder to make it appear that way. Is that fake or giving a false sense of something? Maybe ... maybe not. Go look at any magazine and I bet you what you see isn't really how it was when they photographed it.

What do you think — do photographs make you jealous or feel like you're missing out?
Posted by Rena Jones at 10:19 AM 2 comments: 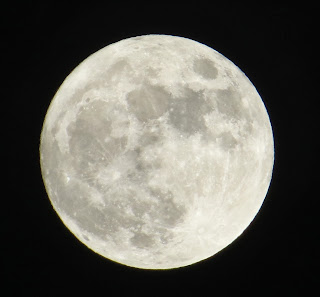 I went outside this evening and took a couple of shots of the moon. I managed to get a few decent shots, mostly because I took the time to put my camera on a tripod AND go outside. I swear, I take so many photographs through my dirty windows or while we're zooming down the highway at 70mph. I can only imagine what I could do if I actually got outside and tried to get some good pictures. Beautiful moon tonight, regardless. I hope you got to see it, too.
Posted by Rena Jones at 10:30 PM No comments: 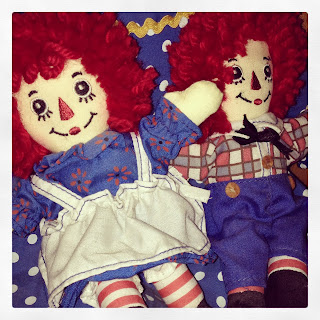 I wish I had my original Raggedy Ann & Andy dolls. I remember them vividly, even down to the boxes they came in with the see-thru windows. For whatever reason, I loved those dolls when I was younger. Like so many of my childhood toys, they were either lost, given away, destroyed, or something. The dolls pictured here are miniature versions of the ones I had. My mother-in-law bought these for me a few years back at the Navy Exchange she shops at. If you look closely, you can see that infamous yellow rickrack and that blue and white purple outfit of Mrs. Beasley. Raggedy Ann & Andy sit happily on her lap, along with some other of my childhood toys. Only a few are originals; the others are all replicas. My MIL has a great pair of dolls that one of her relatives hand-made for her. I should have taken pictures of them when I was in CA recently. They're awesome dolls.

Raggedy Ann was born on September 7, 1915 by creator, Johnny Gruelle. Three years later, she was marketed along with a series of stories. Her brother, Andy came long in 1920, dressed in a sailor suit and hat. Raggedy Ann was designed for Gruelle's daughter, Marcella. She brought him an old, hand-made ragdoll, and he drew a face on it for her. The story says he pulled down a book of poems — The Raggedy Man and Little Orphan Annie — and decided to call the doll, Raggedy Ann. Marcella died at the age of thirteen after receiving a vaccine for smallpox. Johnny Gruelle blamed it on the vaccine, although doctors said she had a heart condition. Regardless, Gruelle became an opponent for the vaccinations and used Raggedy Ann as a symbol for the anti-vaccination movement.

Did you have a Raggedy Ann & Andy doll when you were a kid?
Posted by Rena Jones at 4:02 PM 4 comments: