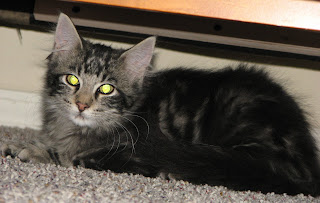 We have a new family member -- Denny! We adopted him last night from Life Savers Animal Rescue in Polson, MT. I'd been watching a few of my friends on Facebook post links for Pet Finders in their local areas. I went to the site and did a search for the Flathead Valley. There were a bunch of rescues listed, but I checked the Polson one first. That's when I saw Denny -- or I should say his little ear hairs! Those hooked me immediately. CJ used to have those long ear tufts. I'm such a sucker for tabbies.
We think Denny is about 3 months old. He came from Hot Springs, MT and started his little life as a feral cat. Poor baby. He'd only been at his foster home since August 10th, so he probably hasn't had any exposure to people. If he has, I'm sure it wasn't good. A lot of the other kittens were jumping all over us, but we couldn't hardly get close to Denny because he was so skittish. We brought him home and he spent most of the night under our bed. Rick and I heard him around 4am, but couldn't find him anywhere. We finally found him in our bathroom in the wedge between the bathtub and the sink. I tried to get him out and he hissed at me. I had him back out and a few minutes later he was just one big purr-box! He loved getting his head rubbed and he started drooling all over the place, so I took that as him being happy.
He was under the bed again this morning when I got up, but I just got him to go into the bathroom where he got something to eat. And once again, he's a big purr-box! He loves rolling over and having his belly rubbed. He also loves having his face and ears rubbed. He's still super skittish and nervous, but with time, I think he'll do just fine. He's got the biggest feet too, so I think he's going to be a big cat when he grows up. Right now he's under the bed grabbing a toy that the boys are wiggling around. I didn't know if I could adopt another cat after losing Belle in March. That was so hard. The thing is, Belle was given to me by my sister because she said she looked so much like CJ. Denny sure is a cutie, especially with those ear tufts!
Posted by Rena Jones at 10:02 AM