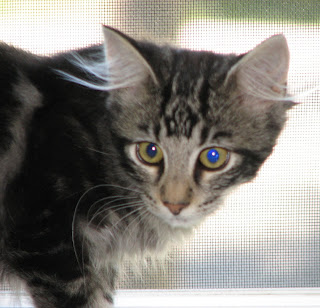 I apologize for not being online much. I've been meaning to catch up on everyone's blogs, especially now that the first draft of my novel is done. Little Denny seems to have other ideas for me though and every time I put my laptop on my lap, he jumps up and wants to dance on the keyboard. If I tuck him under my arm, he wants to chase the cursor. If I try to type fast, he's fascinated with the clickety sound of the keys. Now he has his face in my coffee cup. He's such a clown. So instead, we've just been snuggling these past few days, and neither of us are complaining.
I realized the other day that it's been over 17 years since we've had a kitten. The last real kitten we got was Belle. Kitty was already pretty big before she started coming inside. It's really hard to believe Denny was a feral cat. He started purring and being affectionate the very first night we brought him home. Now he's just a bundle of love. He's so much like my other cat, CJ. It's like CJ sent him down with instructions. He acts just like him, even down to sleeping on my neck, mixing up my hair, and going under the covers. It's almost uncanny. There are a few other things I'd forgotten ...

Those little nails are SHARP! My poor hands look pathetic. Denny got his first nail clipping yesterday and did great. He didn't fuss at all, which was a sharp contrast to Belle. She would literally scream and bite and kick. Frankly, cutting her nails just wasn't worth stressing her out so much, so only did it when I absolutely had to. Denny just sat there like an angel and the difference is like night and day. I'm not bleeding nearly as much!

Kittens NEED toys! Sometimes he gets all lovey and then that turns into playtime. But if he gets going long enough, it turns into kill-everything-in-sight time, even if that includes hands, toes, faces, noses, hair, etc. I don't want him to play too rough, so when he gets like that, I have to have a furry mouse or some sort of toy to let him "kill".

Feral cats must have a really SHORT memory span. It's so hard to believe Denny was once an outside cat living in a feral colony. When we went to adopt him (he was the one we specifically went to see), he wouldn't let us get near him. All the other cats had been there longer and they were playful and all over us. Denny hid behind everything and wouldn't let us near him. That's not the case now. He's all over us. If he was living outside in the cold, he must know a good thing when he's got it because he's taking full advantage of having the good life now.

It IS possible to miss kitty litter on your bed. I know that sounds gross, but those of you who've lost a cat will know what I mean. Yeah ... it's possible.
Posted by Rena Jones at 9:22 AM