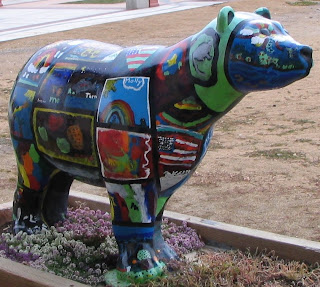 Rick and I flew into Helena, Montana to check out possible homes to buy. Helena is the capital of Montana and that was originally where we planned on relocating. We even had a bid on a home, but after an escrow on our house fell through, we lost it. It was a beautiful home. The front hallway had tiles on the floor with images of northwestern wildlife imprinted on them. We were really sad to lose it. We made two flights to Helena to look, but each time something went wrong with the sale of our house and we weren't able to purchase a home. We finally changed realtors and that helped things tremendously. However, it wasn't until September 2006 that we began looking seriously again. This time we looked further north in the Flathead Valley. That's how we settled upon our house in Bigfork.
We've only lived here 4 years, but I often wonder how our lives would be different if we had moved to Helena. One big issue was that Helena is the state capital and more job opportunities would have been available for Rick. It is also much closer to the Yellowstone and Grand Teton parks, so I'm sure we'd be spending more time at those places. However, Helena is a lot flatter and pretty windy. The weather is also milder, from what I've heard, and I like our dramatic seasons. Helena doesn't have the beautiful mountain ranges like the Flathead, such as the Mission Mountains and the Swan Range. I often forget how flat Montana is because I'm surrounded by beautiful mountains. It's another story as soon I drive somewhere and realize how much of Montana is prairie land. We're less than an hour from Glacier National Park, so we're able to experience the park at all times of the year, even in the winter when we've gone snowshoeing around Lake McDonald. To us, "a day in the park" means spending the day in a national park. This is still surreal to me, having come from California where the closest national park to us meant a 6-hour drive.

I was looking through some of the photographs we took on that trip to Helena in 2005. Some of the homes were amazing. I'm sure we would have been happy living in any of them. It just wasn't meant to be, I suppose. I also found this picture above of a painted bear. These bears were all over Helena, but I think this is the only one I got a picture of. This particular one looks like it was painted by children. I can't seem to find a link of them all, but each one was painted different. West Yellowstone, Montana had a similar thing with painted bison, but I believe they were supposed to be auctioned off. We saw some last time we were there, so maybe some were bought by local businesses. I've posted a few of those pictures before. I guess they call them buffalo now. Not sure when everyone changed back to that, but to me they'll always be bison. Cheyenne, Wyoming had giant, painted cowboy boots, though I am not sure if they're still up as well. I hope so. Anyway, it was strange to think that it was exactly 5 years ago today that we started this entire process of moving from California to Montana. It was a huge change for us -- a good change.
Posted by Rena Jones at 10:20 AM