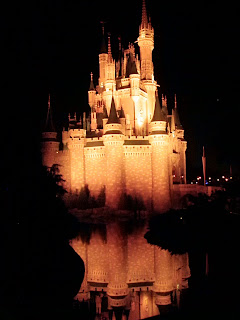 UGH! I've been trying to get on Blogger all day. Looks like it was a problem with my cookies. I tell you, the only good cookies are the ones you can eat. Computer cookies are nothing but trouble. Chocolate cookies are so much better.
We got home from Disney World on Wednesday afternoon. Our flights home were much nicer than the flight getting there. The one from Salt Lake City to Orlando was just awful. We had to land during a really nasty storm. Even the flight attendant mentioned it being an E-ticket ride. I figured if she said something like that, it had to be bad. When we asked the pilot to rate it from 1 to 10, he gave it a 6 or 7. Eeek! Fortunately, the flight home was much nicer and we were able to travel up and around all of the storms up north.
Sadly, Neil was sick on our last day in Florida. He made it back to Epcot, but didn't last too long. On his way out of the park he was able to get his picture taken with Marie from The Aristocats. He loves white cats, so that made him happy. Nathan and I spent the day wandering around World Showcase. The day after we got home, Nathan got sick. I'm just glad they got sick when they did and not right in the middle of the trip. That would have been miserable for them. So anyway, the past few days they've been trying to get over whatever it is they have. I'm hoping to not catch it myself.
We had 10-day park hopper passes and it's amazing that even with that amount of time we weren't able to see and do everything we wanted. It was just crazy. We had a lot of restaurant reservations, so I guess that added to the time situation, along with some dinner shows. I would have liked to have spent more time at the waterparks. Blizzard Beach and Typhoon Lagoon were both a lot of fun. I was surprised how much I liked them, especially since I'm not a big public pool fan. Both days we had dinner shows though, so we had to rush out early. Maybe we can spend more time at them if we ever get back there.
The weather our first week was perfect. It was in the low 80s with very little humidity. I was really surprised by that because I was expecting it to be hot and miserable. It was really nice. The second week things heated up and it was in the mid 90s at times with a lot more humidity. Even so, I don't think it was as bad as it could be. We really lucked out, especially that first week.
Rick and the boys had been to WDW once before, but it was my first trip. I grew up going to Disneyland all the time, so I wasn't overly excited about going to WDW at first. I started looking forward to it more and more as it got closer. I'm really glad we went and so blessed to have in-laws who were willing to help us get there. I'm not sure if we'll ever be able to afford to get back, but I hope so. There's still so much I'd love to see and do, not to mention do a few things again. I'm hoping to make a slideshow of some of our pictures, so hopefully I can get that up on my blog sometime soon.
Posted by Rena Jones at 7:37 PM