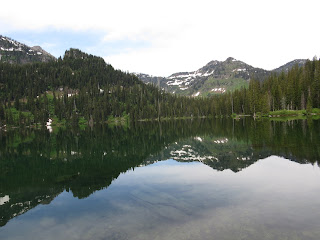 Rick and I hiked to Cold Lakes in the Mission Mountains today. It's not a long hike at 3.8 miles round trip, but it's considered a moderate one as far as hikes go. It's way back in the mountains in the heart of bear country — both black bears and grizzlies. As always, we came prepared with bear spray. Of all the hikes we've taken, we've never had to actually pull out the canister of spray from our holders. Today we did. We had just gotten started on the hike and were going up a pretty steep incline. I stopped to take a picture, as usual, making Rick get a little ahead of me. I called for him to wait up, which is a good thing because right as I caught up with him, I looked down the cliff in the forest and there was a black bear looking right at me. It couldn't have been more than 50 feet away. Had Rick kept on walking, the bear might have met him on the trail because he looked like he was going up towards it. I managed to spit out, "Bear!" and he took off. From what little I know about bears, this one looked young, like maybe it was only 1-2 years old. If that's the case, there was a good chance the mother was around. The bear ran off in the direction we were heading, so that's why we decided to carry the spray out of their holders for awhile. I wish Rick had seen him, but he took off. I didn't even get a picture. 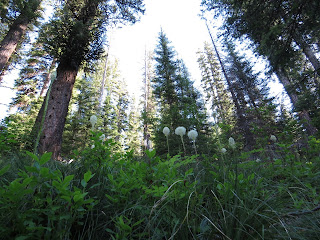 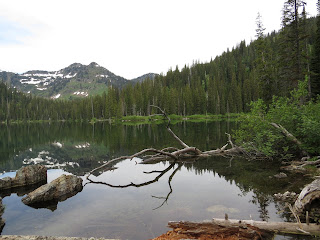 The photograph above is of the lower Cold Lake. There are actually two lakes — lower and upper. If you look at this picture and see the mountain with the snow still on it, that's where the upper lake is. I was really glad Rick was willing to see both of them. The trail to the upper lake is not maintained and it was really rugged. We had to climb over and under trees, walk through bushes that literally blocked any visibility, and deal with mosquitoes from hell. Gosh, the bugs were horrible! I only had a couple of OFF packets in my backpack, but I was thankful for those. They helped, but only a little. Note to self: BUY MORE BUG REPELLANT ASAP! 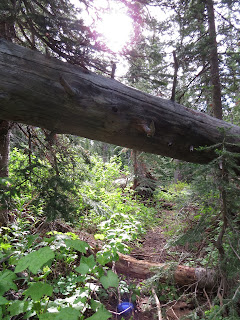 There were quite a few places going to the upper lake where we got off the trail by accident. There's just too much fallen debris to really know where the trail was. It got pretty gnarly at times. Sometimes we just had to guess which way to go. That's scary in bear country. 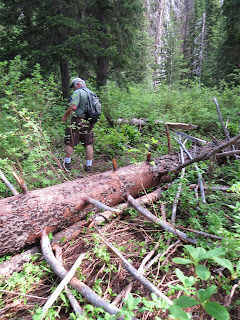 This picture below is of the upper lake. Basically, the upper lake is about the same size as the lower one. These pictures don't do it justice at all. First of all, it was sunny the whole time we hiked up, but once we got to the lakes the clouds rolled in. It was really windy at the upper lake too, and there wasn't anywhere to really sit down by the shoreline. We hoped to cross the stream that runs from the upper lake to the lower one, but there was no way. It was filled with logs and they weren't sturdy enough to walk on. So, we took a few pictures, looked around, and headed back to the lower lake. 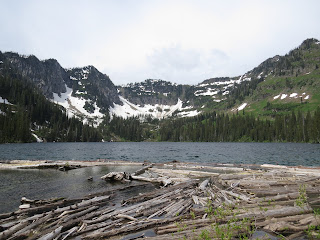 The beargrass is in bloom right now. That's the flower pictured below. I love this stuff. It's a member of the lily family, and apparently, once it blooms it won't do so again for another 4 years or more. It's beautiful and has the most incredible feel to it. 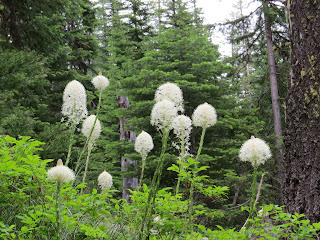 This picture is of the moon, obviously. We left the house this morning at 7am and got to the trailhead around 8am. The moon was still really bright, and with my new camera I was able to zoom in and get a few good shots of it. I love daytime moons. 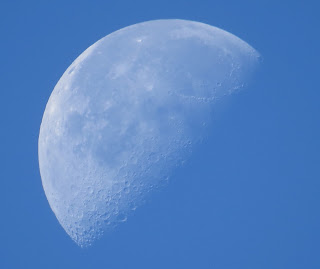 Below I'm going to post a few pictures of my gory leg, so if you don't like that sort of thing, don't look past the rock picture. Right after we got to the first lake and were heading towards the upper one, I took a nasty fall on some rocks. We were in really rugged terrain and we kept hearing sticks breaking. A lot of times bears break them when they walk on them, so that's what I thought it was. Well, Rick was ahead of me and he saw one thing, but I saw another. I saw a furry, brown head with little brown ears. Between that and the breaking sticks, I totally thought it was a bear. Rick heard the sticks breaking, but what he saw from his viewpoint was a man gathering firewood. So, he sees one thing, and I'm saying, "It's a bear! It's a bear!" He tells me it's a man, and then I get a better view and see that this man has a dog with him — a stupid dog with fluffy, brown fur and little round ears! I tell you, that dumb dog couldn't have looked more like a bear if it tried. Anyway ... in all of the excitement, I took a wrong step and went down hard. Below is a picture of the rocks I fell on. I think I stepped between them and my ankle twisted, causing me to totally lose my balance. It was one of those falls where I just kept falling. Had Rick not grabbed me when he did, I would have gone completely down. 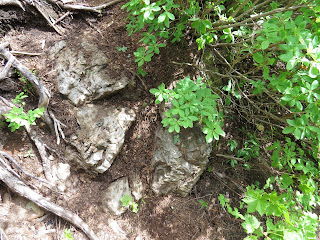 So anyway, I pull myself up, and am more worried about my camera around my neck than anything else. Rick's trying to get me to go one way, but I'm heading towards a log because I know I'm going DOWN! I've done my share of fainting in my lifetime. I know that feeling. I know when I have to sit down. This was one of those times. I knew my leg hurt, especially my knee where I smacked it on a rock, but I didn't realize how bad I had scraped it. 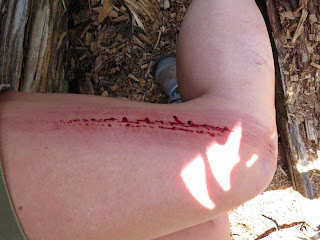 Of course, nothing ever looks as dramatic in pictures as it does in real life. But when I looked at my outer thigh and saw this, I knew I'd whacked it pretty hard. Rick and I both had first aid kits in our packs, but they were the smaller ones, which are pretty much useless when it comes to something this large. I had to use tissues to the stop the bleeding, which seemed to take forever. Then of course, the tissues got all stuck in the wound. We did have a few antiseptic wipes, which helped, but not much. Then all we had were small bandages. Rick patched it up as best as he could, but it was a mess. The mosquitoes were having a freaking field day with the free lunch! They must have told the yellow jackets because they appeared literally out of no where! So, Rick's trying to stop the bleeding, trying to get this mess cleaned up, AND fighting off all these killer insects who think I'm some kind of buffet. 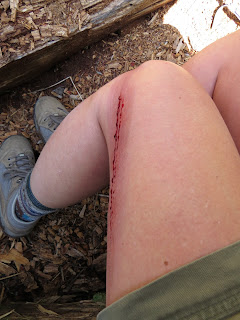 All this happened BEFORE we were at the upper lake, mind you. Rick was all ready to head back to the car, but I didn't want to go all that way and not see both lakes. So, I basically hobbled on the undeveloped trail to the upper lake. That was a new experience in pain because the trails were full of brush. When the brush wasn't hitting the cuts, I was dealing with climbing over huge trees, and fussing with my bandages that wouldn't stay on. Fun stuff, I tell you! But anyway, we managed to see both lakes. After asking quite a few people we met along the way, we finally ran into two men who had a couple of larger bandages they were willing to give us. Not only that, but he gave us more antiseptic wipes. Then he simply handed his whole first aid kit to us. He goes, "No, here, take it! My son works in a hospital. I get these all the time." Bless his heart! After I got patched up more, we headed back to the lower lake and sat by the shore for a few minutes. I needed to rest and we both needed to eat something. The mosquitoes were relentless though, so we didn't stay too long before heading back.

Despite the drama and trauma — it was freaking awesome!
Posted by Rena Jones at 8:41 PM