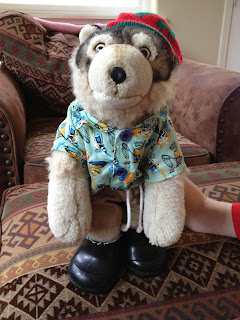 This is Little Wolf. Neil got him at one of the national parks we've visited, probably Yellowstone. Neil and I went up to the thrift store to look around a bit today. Neil is my little Salvation Army buddy. He came running up with these black rubber boots from Build-A-Bear. Little Wolf isn't a Build-A-Bear toy, but Neil has others that are, so the boots will fit quite a few of his critters. Little Wolf got to wear them first. I just looked online and see that these same boots cost $7.50, not including tax and shipping. We paid 75 cents. Not too shabby considering the soles aren't even worn down. HA! Little Wolf is ready for puddle stomping. Neil also got 3 chapter books for 25 cents each. He had the first chapter of one read by the time we got home. 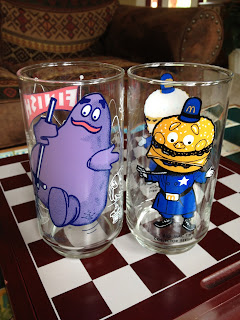 I found these McDonalds character glasses. I picked them up immediately, much to the dismay of the lady who came up next to me. I think she was kind of hoping I'd set them down again, but I didn't. We have had our share of fast food restaurant glasses. Many have broken over the years. All we have left is an Alice in Wonderland one and a Garfield one. So, these were a cool addition, especially at 50 cents each. I looked on eBay and see the whole series of six glasses going anywhere from $25 to $45. Considering these were from 1977, they're in fantastic condition. I also found a square scarf with red, hot chili peppers on it. Not the band, sadly, but just cartoon peppers. I had to buy it, of course.