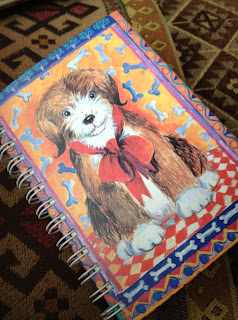 I was looking through this book today. Its one of those write-in journals. I used it to keep track of our camping trips. We bought our first trailer in 1998 — a Coleman pop-up. Up until then, we had only taken the girls tent camping, so this was a big step up for us. 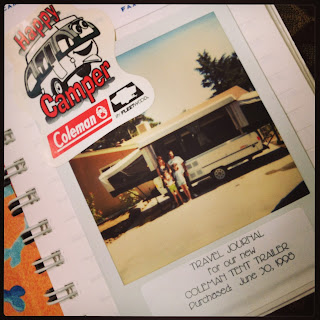 In the picture above you can see the pop-up along with me, Rick, and the girls. We loved it. We took it to the beach a lot. Jalama Beach was a county campground and it had spots you could camp directly on the sand. With the pop-up being so light, we could easily move it around by hand to get it in just the perfect position. I think the furthest we took it was Yosemite NP. 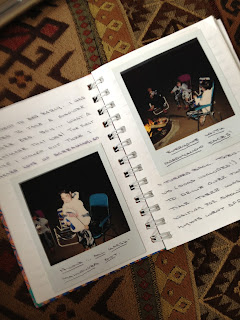 The book is fun to look through. I kept the book in the pop-up along with an old Polaroid camera. During each trip, I'd write what we had been doing, where we'd gone, what we'd seen, etc. I kept a roll of tape in there as well so I could attach the instant pictures. This was obviously before digital cameras and cell phones. This particular book goes from 1998 to 2001. Nathan was born in 1991 and Neil came along in 2002, so I guess things just got too hectic to keep the journal going — although we never stopped taking camping trips.

In fact, we increased them and eventually traded the pop-up in for a 24' Prowler travel trailer. That had two bunks for the girls, but eventually we needed more room for the boys, so we went with the 28' Frontier trailer we have now. This one has two sets of bunks on one end and a full-sized bed on the other. Now that the girls are older and don't travel with us as much, we've seriously thought about downsizing again. It would be nice, but that would mean taking on trailer payments again, which would be hard. As it is now, our trailer is paid off completely, even though it's really big and hard to get into a lot of the local places. 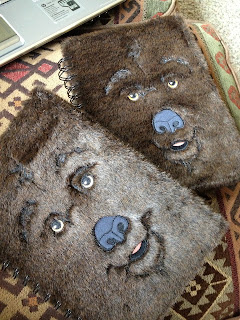 The journal was fun though, so I'm a little sad I stopped doing them for so long. I mean, sheesh, it's been 12 years! Many years ago, my mother-in-law bought me these two journal books above. She got them at Disney's Grand Californian Hotel. They're bears, if you can't tell, and they're covered in faux fur. My intention was to continue the travel journals in these. Sadly, I never did, but I still have both blank books. We're going to Olympic National Park in a few weeks, so it might be fun to start the journals up again.
Posted by Rena Jones at 4:42 PM