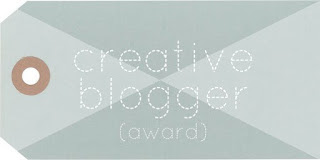 On the 29th of June, Bish Denham presented me with the Creative Blogger Award. It was such a nice surprise, especially since I've been so bad with my blog these days. I'm trying to get better at keeping up, but due to some stalker-like incidents, I've been a little leery about what I feel comfortable posting. Screw them, huh?

The rules for this award are simple:


So anyway, I want to say thanks to Bish for nominating me for this award. I've done quite a few posts in the past with random facts about myself, so I apologize if I repeat any here. My five random facts are as follows:

1. I used to have Ondontophobia, which is an irrational and overwhelming fear of dentistry. After finding some very good dentists, I no longer have the fear. I have none, whatsoever. In fact, I'd rather be at the dentist than doing a lot of other things, even something as simple as an eye exam. {{{shudder}}}

2. I'm not a picky eater at all, but three foods I despise are dates, salmon, and Brussel sprouts. If something has dates in it, I simply won't eat it. Salmon is one thing I really wish I liked because it's so good for you. I recently tried it a sample at Costco not too long ago, just to see if my tastes had changed—nope—it's still nasty.

3. I have reoccurring dreams about bears in my yard. In the dreams, I'm always trying to get a door or window shut, thinking the bears are going to break into the house. Most of the time, the bears are just meandering in the yard, and not caring about the house. In one dream I was so panicked I was trying to hammer a screw through a glass window. How that's for logic?

4. I'm horrible at reading directions. It doesn't matter if it's something like a kid's board game or a complicated origami project. They might as well be written in Swahili. However, I have a good sense of direction, which has helped me get out of many Las Vegas casinos. Go figure.

5. And finally, I have an unusually high interest in the Holocaust. If I could go anywhere in the world, Poland would be on the top of my list. I'd love to visit Auschwitz sometime. I also want to see the Holocaust museums in DC and Los Angeles. Most everything I watch on television these days is about the Holocaust. Last night Rick asked if we could watch something a little more light-hearted. I guess I've been bombarding him with sad shows lately. So, I compromised and said, "Hogan's Heroes"? I know, I'm a lost cause ...

I know that's only four, but I'm so out of touch with the blogging world. No pressure for any of you, but I do enjoy your creative blogs!
Posted by Rena Jones at 7:42 AM