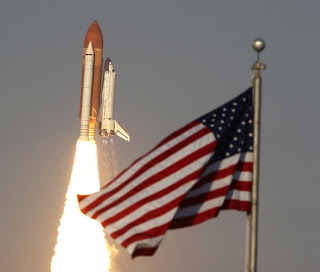 The boys and I took a break from our school work today to watch the final landing of the Discovery space shuttle. What a historic moment. I found myself feeling sad for this massive piece of machinery. It was an odd emotion for me -- it's a space shuttle, not a person. At the same time, I was happy to see it's going into a museum. Hopefully, many people will be able to visit and learn more about it as well as the missions it took. I'd love to see it someday.
Growing up in Southern California, the space shuttles were no stranger to me. I can't remember how many times I was awoken by sonic booms when the shuttle had to land at Edwards AFB instead of the Kennedy Space Center. Even though I lived several hours away, those booms were loud.

So, today the boys and I watched Discovery make its final landing. We also looked online at some pictures of the shuttle. My favorite is the one I posted here with the American flag in the foreground. The boys loved seeing a picture of Buzz Lightyear standing in front of Discovery after taking a voyage in 2008. They thought that was just the coolest thing ever. Buzz Lightyear on the space shuttle -- makes sense to me!

It must be absolutely amazing to be an astronaut. I guess the closest thing I'll ever get is Mission: SPACE at Epcot. Now to decide if I want to be on the Orange Team or the Green Team. There are motion sickness bags for the Orange Team. It's that intense. If you've been on it, which team did you do?
Posted by Rena Jones at 10:38 PM