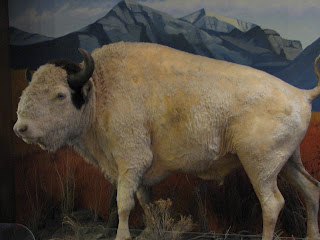 This big guy isn't alive, but he was at one time. He was born on May 3, 1933 at the National Bison Range in Montana. His mother was naturally brown, but as you can see, he was a white bison. He was first nicknamed "Whitey", but was later known by most as "Big Medicine". Although he was a white bison, he was not a true albino because because he had slightly pigmented, light-blue (instead of pink) eyes and tan (instead of white) hooves. The topknot of dark brown hair made him unique among other white bison.
White bison are extremely rare animals. They say only 1 in 10 million births are white. Native Americans on the Great Plains depended on bison to survive. They considered these white ones sacred and believed them to have supernatural powers. The Blackfeet tribe also considered white bison to be the property of the sun. Any man who killed one received his power from the sun and the "good medicine" held by the white hide extended to the hunter's family and his entire band.
On average, a bison can live about twenty years. Big Medicine spent his entire life on the National Bison Range. Special care was given to prolong his life. His fame spread throughout the world. He grew to more than 1,900 pounds, was 6 feet tall at the hump on his back, and measured almost 12 feet from the tip of his nose to the end of his tail. Big Medicine died on August 25, 1959 at the age of 26 years. Following his death, Big Medicine's hide was sent for tanning in Colorado and then shipped back to Montana to a taxidermist. He now resides at the Montana Historical Society in Helena. 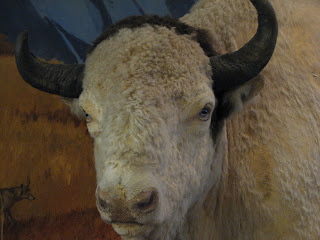