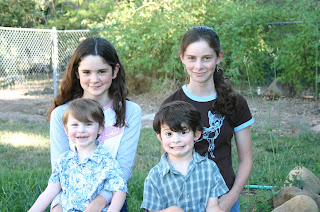 These are my four kids. This picture was taken awhile ago -- probably around 2005. My oldest is twenty-two and my youngest is ten, so that might give you an idea how much they've changed. But, I love this picture because it's a rarity to get all four of them together at the same time.
My kids are my life. I adore them more than anything. Before Rick and I even began trying to have children, we hoped I'd be able to be a stay-at-home mom for as long as possible. Back in the late 1980s, I had no idea I'd eventually be homeschooling them. I wouldn't want it any other way.
When my kids were babies, Rick and I came up with nicknames for them. Nichelle was Shelley-Bellies. Nicole was Coley and Angel Baby. Nathan was called Mister Mister and Neil was Neily. All cute names, but obviously not ones that have really stuck with them over the years. That's okay, too.
However, when I was little, my mom and her boyfriend nicknamed me Pill the Tyrant. What the hell? I don't know if my mom came up with that name or if it was her jerk of a boyfriend. Pill the Tyrant? Seriously? Was I that much of a pain to them? Did they not like having me around? Wow -- what a nickname.
As a kid, I thought it was funny, but that was because I didn't understand what it meant. As an adult, it makes me mad. Sometimes I think of things from my childhood and I get so mad. Other times I just try to learn from it. My kids have never been a pain, or a pill to me -- never.
Did you have any nicknames?
Posted by Rena Jones at 2:08 PM