It's a Pirate Parrrrrrty ... and a contest! 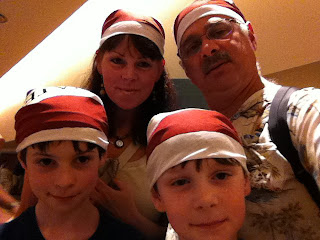 Those of you who know me well know that I'm really interested in pirates. I don't particular like what they did (and still do) because they were ruthless, violent people. I am, however, fascinated by the history of pirates, especially what is considered to be the Golden Age of Piracy. I have many books on piracy and am currently reading one by Nigel Cawthorne called A History of Pirates. To me, it's fascinating stuff, although brutal and heartless.
Whenever I see something pirate-themed, it easily gets my attention. You can guess that by the photograph above. That was taken last May when we were at Walt Disney World with my in-laws. My MIL really wanted to do the Pirates and Pals Fireworks Voyage. It was a lot of fun. We started off at a reception area where they made us put on these silly bandanas. Then we literally pillaged the food area that was filled with massive amounts of loot, including treasure chests bursting with chocolate gold coins. After we stuffed our booties -- I mean, our faces, which probably went right to our booties -- we got our picture taken Captain Hook and Mr. Smead ... 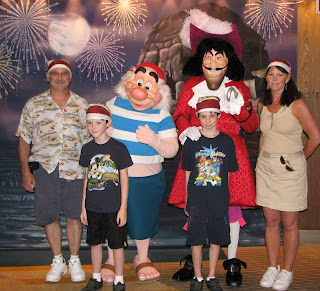 After the reception, our group boarded a boat and headed out onto one of the lakes to watch the fireworks show. It was a lot of fun and the crew members really got into it. There were contests for the kids. Nathan won a pirate-themed backpack and Neil ended up with water pistol shaped like a pirate's flintlock. When we returned to shore, we were greeted by Peter Pan himself, who I might add, was quite spastic. I suppose any grown man running around in green tights would have to be a little spastic.
Of course, Disney is an awesome place for any pirate fan. Not only is there the pirate voyage, but there's also the beloved Pirates of the Caribbean ride. That's always been a favorite of mine. I went on that ride when I was a baby at Disneyland, possibly right after it first opened. I honestly believe with all my heart, that that ride is my very first memory. I still remember seeing the skull & cross bones up on the wall above the tunnel. I couldn't have been more than a year old. Bizarre. Oddly, I didn't get into the movies when they first came out. I waited and saw the first two on DVD when they were released. By the time the third and fourth came out, I was hooked and went to the theaters to see them. Of course, the boys and I had to stop and get this picture while we were in Downtown Disney one night ... 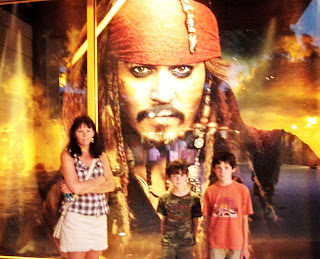 It's a little blurry, but you get the idea. Nothing better than a bigger-than-life sized Captain Jack Sparrow! Besides reading books about them, I'm also really into pirated-themed music. I especially love pirate rock. One of my favorite bands is called Pirate Jenny. They're don't perform or make albums anymore, but if you check iTunes, you'll see they have some awesome songs. They later formed a children's pirate band called Captain Bogg & Salty. I have all their music as well. I don't think they're active right now because they recently signed on with Disney and now do the music for Jake and the Neverland Pirates. I couldn't be happier for these guys to have made it big like that, but I have to admit, I still love their old stuff a lot.
So anyway, this brings me to the reason for this long, blog post -- pirate music! Awhile back, I received a copy of a Disney pirate-themed CD. It's called Disney's Pirates of the Caribbean Swashbuckling Sea Songs. I already had a copy of it, so this extra one has just been sitting in my dresser unopened. I'd like to give it away to someone who might enjoy it as much as I do. Keep in mind these are kid's songs and they're all pirate-related. There are some great songs on this CD, which came out in 2007. To enter the contest, all you have do is leave me a comment on this thread telling me something pirate-related. It can be a movie you like, a book you've read, a favorite song, a dream -- anything, just as long as it relates to pirates in some way. Then I'll randomly choose one winner exactly one week from today on April 10th. Good luck to everyone who enters -- ARRRR! 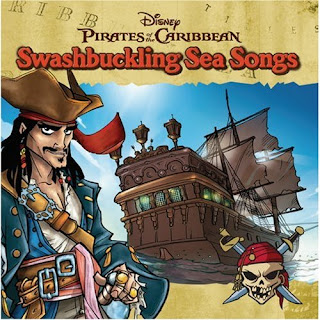