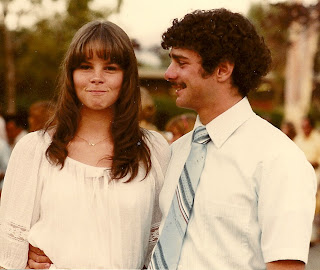 April 24, 1981, Rick and I went on our first date. For some reason, we've always made a bigger deal out of this date than our actual wedding anniversary. Maybe that's because we were married on Valentine's Day and it's always a busy day. Thirty-one years. Gosh, that's a long time.

Our first date was during the annual Ojai Tennis Tournament. If you click on the link, you'll see that it starts today and has been going on for 112 years. I don't think they still do it, but back in the 1980s they used to have a local dance for the tournament. It was generally held at the local high school, and that's where Rick and I went on our first date.

I remember that dance very well, even to the clothes we both wore. I also remember Rick asking me about a necklace I had on. It was a little, gold heart on a thin, gold chain. He asked who gave it to me and I remember hearing a bit of jealousy in his voice. That faded away after I told him the necklace was given to me by my mom.

The picture above was taken the day Rick graduated from high school, just about two months from that first date. As you can see, my heart necklace was replaced by one Rick gave me. It says "LOVE" and has a tiny diamond in the letter O. I still have it. To be honest, I hate this picture because Rick's brother-in-law was trying to make me laugh. I have a monkey-face thing going on. However, it's one of the first pictures we had taken as a couple. 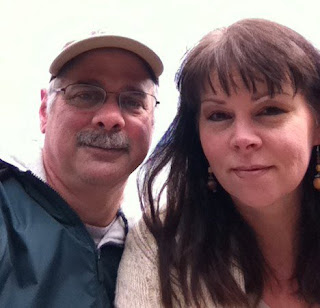