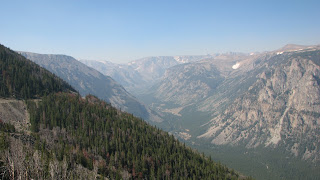 After we took Nicole to college in Billings last weekend, we drove back over the Beartooth Highway. If you're not familiar with this road, check out the link. It's one of the most scenic in the country. It begins near Red Lodge, MT and ends in Cooke City, MT. However, most of the actual road and area is in Wyoming. Last year we stayed at a forest service campground in a tent along this highway. That was an experience. This year we spent one night in Billings and then one night in Yellowstone. I'll post YNP pictures tomorrow. 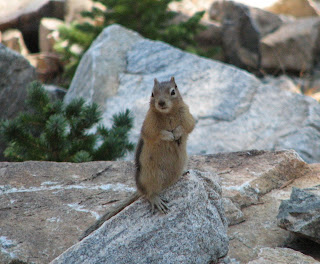 I believe this is a golden mantled ground squirrel. We stopped at a lookout and walked around a bit, where we saw squirrels, chipmunks, birds, and those noisy, clacking grasshopper things. They were everywhere. 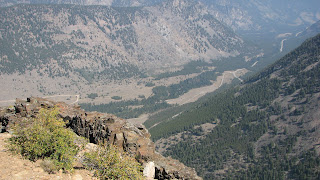 The picture above is taken from the trail lookout. That area down below is where the campground is that we stayed at last year. We had camped next to a creek, but it was so loud that we might have pitched our tent at the base of a waterfall. We wouldn't have heard a bear creeping up even if it had a bullhorn! 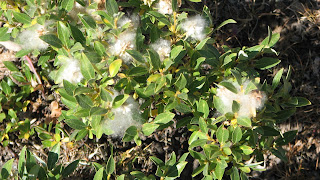 This cottony stuff was taken when we were close to the summit. I'm not sure what the plant is, so I'll have to look it up. It was growing near the tundra area, which is pictured below. It was super windy, so we didn't spend much time outside this trip. Something in the air was making my eyes water really bad. 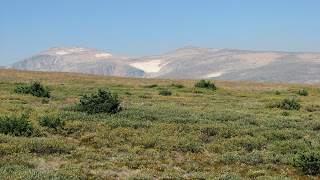 The tundra is about 9,500 feet in elevation. Last year Rick really wanted to hit 10,000 feet, so we parked near a trail and he hiked up a butte with his GPS. I think he managed to reach 10K doing that. Parts of the range tower over 12,000 feet in elevation. Granite Peak is Montana's highest mountain at 12,799 feet. 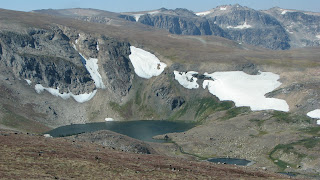 This was one of the many alpine lakes we saw. A lot of these are way up in the tundra areas as well as down in the lower elevations. Most of these pictures were taken from inside the car, through the dirty window. Like I said, it was so windy outside. A lot of these places were on super steep parts of the road as well. I'm not exactly a "fun" person to be with when we're this high up. I get kind of ... well, freaked out and cranky. 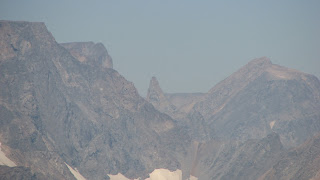 Above is a picture of a ragged part of the mountain. This is called the "Bear's Tooth" which is how the highway got its name from the Crow Indian word "Na Piet Say". 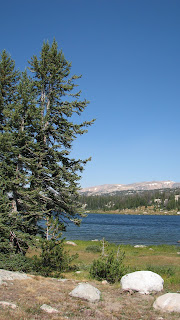 I saw the sign, but now of course, I can't remember the name of the lake above. That's not surprising since the area has over 10,000 mountain lakes. You can see a few of them in the picture below. 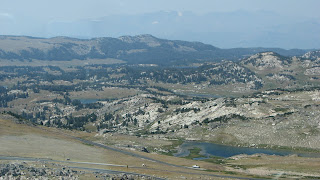 Below is a picture of Neil with a wolf hat on. He's totally into wolves right now, especially werewolves. We stopped at a place called Top of the World, which offered gasoline, some food, and a gift shop. 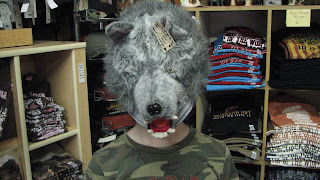 Below is a picture of another lake. This was taken very close to a campground that looks like it might be a nice place to stay. Maybe we can take our travel trailer up here sometime. We couldn't this trip because we had towed Nicole's car to college with her. This picture was taken from the boat launch and it looks like prime grizzly habitat directly across the lake. Grizzlies prefer open fields, whereas black bears are more often found in forested areas. I'd really like to kayak in some of these lakes! 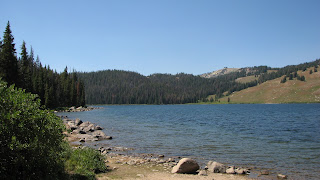 We drove up to an old forest service tower and checked out the area from there. It was manned with volunteer staff and they had just refurbished the inside the of the tower. Sadly, I didn't get any pictures of the inside. We're going to be camping in a similar tower in just a few weeks. 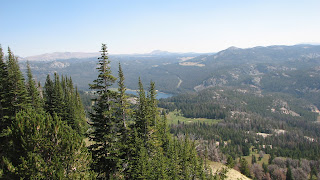 Below are some berries that were near the base of the tower. Again, I need to look these up and see what kind they are. 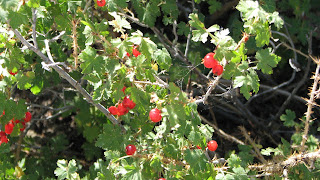 And finally, the picture below is some sort of bird of prey. I'm not positive, but I'm guessing it could be a Northern Harrier. There were four of them as we drove down from the lookout tower. It was pretty spectacular to watch them diving around. I'm surprised I managed to get a couple of pictures of one. I was in the process of eating a protein bar when they were spotted and it was hard to look up high, focus my camera, and chew at the same time. Ha! I thought I was going to choke on the peanut butter. 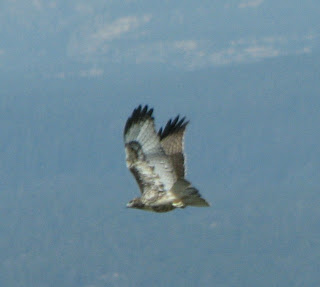 Anyway, it's a beautiful scenic highway, so if you ever get a chance to drive on it, you really should. One you go over the summit and start heading down, it looks almost surreal. Last year I kept saying it looked like something Walt Disney had designed. Every rock, every lake, every little tree or bush was just in the perfect place. It's amazing to see God's handiwork still relatively untouched like this. Beautiful, beautiful place!
Posted by Rena Jones at 2:43 PM