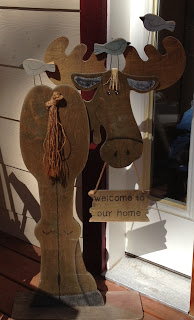 Rick and I stopped at the dump today. Well, it's not actually the real dump. It's more of a dump station where you drop off your trash, which is then transferred to the local dump. I've posted about it before and how I've often come across interesting finds there. Well, today as Rick was emptying our bins, I saw an elderly man take something moose-shaped out from the back of his truck. He fiddled with it for a second and then gently set it down by one of the bins. Usually, people leave stuff outside the bins if they think someone else will want it. I've done that a few times before. As they say ... one man's trash, another man's treasure.

Anyway, I asked Rick if he would go get whatever it was. I was surprised he did it. He asked the man if he could have it and then told him his wife was too embarrassed to ask for it herself. They both had a good laugh at my expense. What makes this so funny is that there was a huge arts & crafts show going on in the little town I live in. Rick and I didn't stop as we drove out of town. I was telling him I like those shows, but I never have extra money to buy crafty things I really don't need. Regardless, I now have a moose outside my front door and it didn't cost me a dime. It could use some touching up, so maybe I'll see what I can do to spruce it up a bit. Poor Moosey didn't want to get thrown away. Thank goodness I was there to save her. Ha!