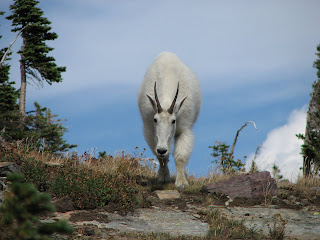 Most everyone who knows me, knows I love mountain goats. Next to big cats and bears, mountain goats are my favorite animals. They're unique because they're only found in certain parts of North America. They have beautiful white coats with striking black features and are very social. Nannies and kids can be in herds as large as 50 or more. They can be seen on cliffs, from the road, walking on the road, strolling along trails and boardwalks and at natural salt licks. Hikers sometimes have mountain goats coming up to lick the sweat from their arms and legs. Many people don't know mountain goats aren't true goats. They belong to the antelope family.

Mountain goats were the reason I started writing stories for children. After a camping trip to Glacier NP a few years back, I had an idea to write a story about a little mountain goat named Manny. He lived on the cliffs and saw the campers below. The story is about him wanting to be part of the fun and his adventures down the mountain. To date, I have a fiction version of Manny's story as well as a nonfiction version with photos. I hope to have them published someday so children from other places can enjoy these animals as much as I do. Because of this story, whenever my kids see a mountain goat, it's automatically named Manny. The picture above is Manny's mother. She came over a hillside and I got this picture right before her kid appeared with her. It's one of my favorite pictures.