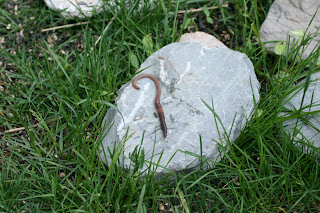 One of my favorite parts of "A Charlie Brown Christmas" is when Lucy describes phobias to Charlie Brown. As a kid, I was amazed how a little girl knew so many big words, like pantophobia. There is a phobia for nearly everything and if you go to The Phobia List you'll probably find several you can relate to yourself. When I was little, I used to have a fear of being behind a cement mixer while riding in a car. I guess I thought it would dump cement and bury me alive. I remember telling my mom I was allergic to dump trucks -- silly.

Some phobias are silly, but others are real. Most know what claustrophobia is, and for those who have it, being in confined places can be terrifying. I have scoleciphobia, which is the fear of worms. Yes, it's a silly phobia and it's not a big deal. I know I won't die if I'm around worms. I simply don't like them -- not even a tiny bit. Taking the picture above was hard for me. My husband was working on a fountain in our yard and came across some worms. As much as I hated to do it, I needed a picture for a book I was writing about animals, so I took the picture. I decided to confront my fear even more by writing a story about worms. It's a silly story that rhymes, about a little worm who is always mad and wants some peace and quiet. While researching for my story, I discovered that a single acre of property can have nearly 1 million earthworms in it. Yes, one million. That's a lot of creepy, wiggly things. It makes me think twice when I'm laying on my lawn. I love birds and enjoy photographing them. Watching American robins pull worms from the ground nearly makes me faint. Better in their bellies than anywhere near me, I guess.

Things could always be worse. I could have peladophobia, a fear of bald people, or genuphobia, a fear of knees. I guess being scared of silly worms isn't so bad. So, how about you -- what are you afraid of?