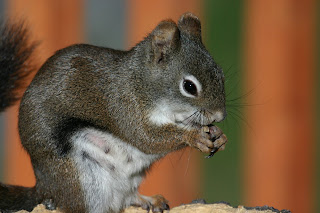 This is Nips. Sure, she's a rodent, but she's cute. My husband named her and from the picture above, I'm sure you can figure out why. Nips is a mama squirrel and she's a constant source of entertainment. My family thinks I've lost it with my squirrely friends, but they make me laugh. We had a black bear in our yard that completely destroyed one of my birdfeeders. That didn't stop Nips. Within minutes of the bear leaving, she was right back up there looking for leftovers. When I had to bring the feeders in because they kept getting destroyed by bears, Nips wasn't happy. She began doing body slams into my glass door. She would look in the window at me and screech. Have you ever been chewed out by a squirrel? It's not pretty.

I've always loved squirrels. They're fun to watch running up and down trees, across telephone wires and bouncing along the driveway. One of my favorite movies is Funny Farm where Chevy Chase moves from the city to become a novelist in the country. He gets so distracted by country life that his writing suffers. In the process, his wife writes a children's book about a squirrel named Andy and gets it published. I always thought they should have made a sequel. Another great Chevy Chase movie is Christmas Vacation where the squirrel is in the Christmas tree. Classic squirrel stuff there. I've heard that children's book editors don't want squirrel stories right now. I'm not sure why, but maybe after Funny Farm came out, they were bombarded with them. That didn't stop me from writing a story about squirrels. It's a photo-illustrated story with short rhymes. It makes my boys giggle every time I read it to them. Maybe someday book editors will be open to more squirrel stories. In the meantime, I'll have to be entertained by Nips and hope that her babies make an appearance soon.