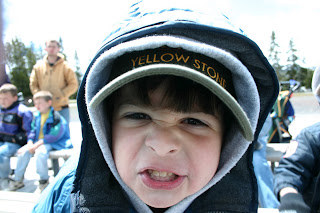 We're going to Yellowstone tomorrow and I hope we don't have to deal with moods like the one above. This is Nathan a few years back. He wasn't really being a brat. He just likes giving me a hard time when I take his picture. Neil was being more of a pain that day. I can't imagine why. Why don't kids like sitting still for an hour to see a geyser erupt? Doesn't Old Faithful know that if it doesn't go off in time, parents have to deal with the above scenario?

We don't usually travel on holidays, but have to now because of Rick's work schedule. Now we're stuck with the crowds, but that's okay. Yellowstone is huge and we know where to go to get away from the people. The good thing is that it's only a 6-hour drive from our house. It used to take us 3 days to get there when we lived in California. We're taking our trailer and staying just outside of the park at the Yellowstone Grizzly RV Park. It's really nice and in the town of West Yellowstone, MT. Just a block away is a place called the Grizzly & Wolf Discovery Center. This is an awesome place to see grizzlies and wolves close up. The education center is fascinating and they give great presentations. When we were there last October, we went to a Birds of Prey talk. My little bird nerd, Nathan, knew all the answers to the questions. The lady pulled out a bird from a carrier and asked if anyone knew what it was. Nathan said, "That's a Western Screech Owl." She was surprised he knew it was a western one. I would have said, "An owl?"

I'm bringing a laptop and if I get any good pictures, I'll post them over the weekend. You never know what you'll find in Yellowstone. One year we watched a mother grizzly bear and two cubs chase down a herd of elk. The elk were on a little stretch of land between Yellowstone Lake and another small body of water. They had no where to go and it was amazing to watch the bear go after them. It's hard to imagine elk screaming, but they did. The sow took an elk down just out of sight from us over a hillside. It was so close that we could see the cubs lift their heads up and look around as they enjoyed their dinner. Another year we watched two sandhill cranes literally attack a young bull elk. The elk was trying to get to their chick and the two cranes weren't going to stand for it. It was wild. We've also seen bison crossing the road that were probably just minutes old. The mothers don't give them much time before they move on with the herd. Like I said, you never know what you'll see in Yellowstone. I will keep you posted!