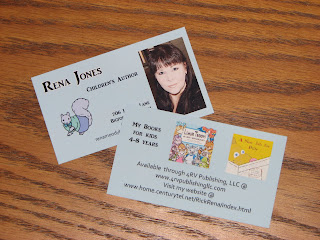 I thought I'd show you the cards I made the other day. I'm a little hesitant to call them business cards, since they're not very business-like. Since I'm advertising picture books, I wanted them to look more fun -- which explains the squirrel. I actually scanned them first, but then realized all my personal information was on there, so decided to take a picture this way. They're a little brighter than what shows up. The picture shows 2 cards since they're printed on both sides. I thought about having some professionally made, but then decided to make them myself. One, I love designing stuff like this. I used to run a small desktop publishing business from my home in the 90s and I made lots of things like business cards, postcards, flyers, brochures, and so forth. And two, I didn't want to have to place a huge order, especially since my books aren't out yet. I figured it would be better to do them myself in small quantities for now. This was my first project using In-Design, by the way. For those who know me, you know I've used Adobe PageMaker for years. I've continued to use an outdated version, even after Adobe switched the program to In-Design. I've put off trying to learn the new one for as long as possible. It's a lot different than PageMaker. I managed to make these little cards, so that gives me hope. My next project will be some postcards for my books. As of now, we're not sure if A New Job for Dilly will be released first, or if Lemur Troops & Critter Groups will be. It's a race to see which illustrator finishes first. Nikki Shoemaker and Lisa Oakman are great illustrators, so I'm confident both books are going to be awesome. At least I have some little cards to promote with, so that's a start.
On another note -- I just want to let everyone know that Belle has forgiven me for the shirt incident. It's a good thing she's bipolar. One minute she's biting me and the next she turns around and wants me to pet her. She's sleeping next to me and seems content, just as long as that nasty tee shirt stays away. My hand, however, will take awhile to heal.
Posted by Rena Jones at 7:16 AM