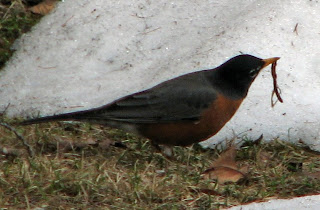 We saw our first robin at the house on Saturday. It was this one in the picture and I managed to get a shot of him chomping on a worm -- lucky me. Worms totally gross me out. I like the fact that the robins eat them, but watching them makes me queasy. Sometimes the worms are so long that they flip and fling all over the robin's head. Stuff like that makes me want to faint. Show me a python crawling around the yard and I'm okay, but a tiny earthworm and I'm all a-quivers. Worms and me just do not mix -- no way.
American robins are common birds. Hundreds of thousands can gather together in a roost during the winter. Earthworms {{{shudder}}} are an important part of their diet during breeding season. In the winter they eat mostly fruits. Robins can produce three broods a year, but only 40% of the nests will produce chicks. Even then, only 25% of those will survive to the month of November. Despite those odds, robins can live as long as 14 years. If you've ever seen a robin dash across your yard and stop suddenly, you'll notice he probably turns his head to one side. Robins hunt by sight, not sound, but you'd think it was the other way around. Thank God for the American robin -- after all, something has to eat all those hideous worms!