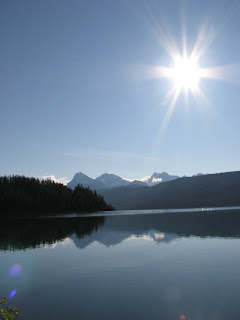 Hi -- we're back from our camping trip. It was a quick one, only 2 nights, but that's long enough when we're dry camping. Our trailer's battery lasts only so long, so 2-3 nights is about all we'll do without hook-ups. We stayed in Fish Creek Campground inside Glacier National Park. We had a nice spot, but it was really wooded, so the campsite was pretty chilly most of the time. As we left today we found a perfect spot to go to next time. At least we were able to pull our kayaks from the site to the lake, so that worked out.
We thought the weather would be cold and rainy, but we lucked out. Saturday night was pretty chilly, but the sky was clear on Sunday. I went out in the kayak early Sunday morning and Lake McDonald was smooth as glass. There wasn't a speck of wind either. We decided to take the boys out for a kayak ride while the weather was still nice. We found the coolest little beach area. We played there for awhile and then went back to the campsite for lunch. By then the weather was still really nice, so we changed into swimsuits and headed back, hoping the beach would still be empty. It was and we spent a few more hours there. The water is still really cold, but that didn't stop the boys from wading around in it and having fun.
Poor Rick -- yesterday morning he was going nuts because he couldn't find his iPod. We were heading back out to the little beach area and he wanted to take it with him. I had already gotten in my boat with Neil, so we were floating around waiting for him. He was taking a long time, and it turns out he was going crazy trying to find it. He looked everywhere in the trailer, in the van, even in the campsite. He never did find it and got in his boat all ticked off. Hours later, he was picking up stuff from the kayak trip when he found his iPod. Guess where it was -- in MY life jacket! I had it the entire time. The thing is, Sunday morning Rick took one of the boats out to go fishing. He had his iPod in his vest. I met him down at the water later and I got in the the kayak and put on his life jacket. So when we all went out later on, that was the vest I still had. Funny how you can't feel what's in your pockets of a PFD. He had been flipping out, thinking he'd lost it or someone stole it, when I had it the entire time. I, of course, thought it was hilarious, but he wasn't too thrilled. At least he found it -- eventually!
Anyway, it was a fun trip, especially since it's so close to home. Our site was nice, but now that we found a better one, I'm sure we'll go back. This campground would be ideal if they had at least electric & water hook-ups, but they don't. At least Rick has a battery-operated CPAP machine now, so being able to dry camp is an option for us. With Rick off Saturday-Monday, I'm hoping we can make another trip up there in the near future. I've made a slide show of some of the pictures I took. As you can see, GI Joe and Tony Hawk (sans hands) had a good time too! Ironically, the osprey taking off in the last one was taken right on our road as we were leaving to go on the trip. I hope you like seeing the pictures.

ALSO -- My publisher has received the final copies of A New Job for Dilly and was going to be mailing my order to me today. So technically, Dilly is OUT NOW and available through 4RV Publishing, LLC and me. I can't wait to see the book in its final stage! If you've pre-ordered it, expect your copy soon. If you'd like to order it from me, email me and I'll get the details out to you ASAP. DILLY is finally here -- I need to grab a pickle to celebrate!