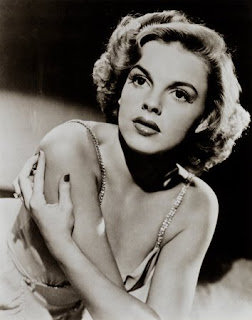 Today is Judy Garland's birthday. If she were alive today, she would be 87 years old. Sadly, she died in 1969 from an accidental drug overdose. She was only 47. I'm not a huge fan, but I did grow up watching some of her films, including the infamous Wizard of Oz. Despite her success with fame, Judy had a difficult life. Here are some interesting facts about her ...
In addition, Judy Garland is listed #8 of the greatest female stars of all time by the American Film Institute. She left behind an amazing legacy with her films, television performances, stage shows, music, and awards. When I think of Judy Garland, my first thought goes to the Wizard of Oz. Her song, Over The Rainbow is ranked as the #1 movie song of all time. That's impressive! Another one of my favorite songs by Judy is The Trolley Song. It was ranked #26 and it's from the film, Meet Me In St. Louis ...