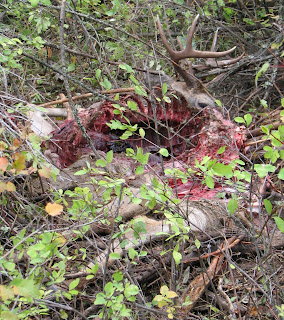 For the past 3 days I've been hearing and seeing ravens. We see them here all the time, but not in these numbers. There have been dozens and dozens of them flying around and squawking. I didn't think much of it the first day. The second day I started to wonder and took a quick video of them making all their noise. Then last night I noticed they were still around even as it was getting dark. I was pretty sure they were settling down in the trees, which I thought was unusual. I wanted to take pictures of the Harvest Moon, but before I could see it very well, my yard was totally dark. There were deer snuffing at me, ravens squawking, and all sorts of noises. Knowing that we have bears in the area, I was really freaked out, so something told me not to hang out on the deck. I ended up getting in my Jeep and driving to get some pictures of the moon. Once it was up high, the yard lit totally up of course.
Anyway, this morning the ravens were still carrying on, so curiosity got the best of me. I put on some jeans, grabbed my camera and the bear spray, and decided to check it out. I live on a small mountain, but we're in a subdivision, so there are quite a few houses nearby. They're also developing the other side of the hill and that's where all the ravens were, so I headed that way. It was pretty freaky because the ravens were NOT happy I was out there. They were screaming and flying all over the place. I came across some pretty wildflowers that seem to be in their final stages, so I was taking pictures of those as I went. I walked back pretty far, but didn't see anything. I decided to head up one hill where most of the ravens had been hanging around. I still didn't see anything, but I saw a pretty purple flower, so I bent down to take a picture. When I stood up -- I SAW IT!

Then I smelled it. Oh my gosh. It doesn't smell good. Its been there at least 3 days. And as you can see, the head is facing the wrong way. I quickly turned on my heels to walk away, but then I stopped. I knew I had to take at least one picture. I did a 360 scan around me, just to make sure I didn't see any bears, then snapped one picture. After that, I booked it out of there so flippin' fast. The last place you want to be in bear country is by a kill. However, the whacko in my just HAD to know why the ravens were here. I guess I found out. Nichelle had seen a bear on Monday, so I knew they were still wandering around. I didn't get any closer to see if I could determine what had killed the buck. Its impossible for me to tell, especially with the ravens feeding on it for 3 days. Like I said, the head is facing the wrong way, which made me think it might have been killed by a bear or mountain lion. I suppose it could have been hit by a car and then wandered up here to die, but it would have had a long way to go. I'm not an expert on that sort of thing and there was no way I was going to stick around to find out WHAT had killed it. I hurried my butt back home!
Posted by Rena Jones at 11:55 AM