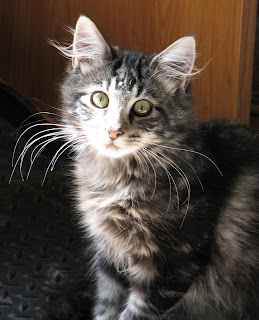 DENNY
By Neil & Nathan Jones
Once there was a kitten named Denny. He was a black and gray tabby cat. He had a sister named Kitty. She did not like Denny. He got slapped around and hissed at by her. Sometimes Kitty would say bad words to Denny. He would repeat them, not knowing they were bad. So Denny had to be locked up in his room. One day, Denny noticed that there was nobody home. So, he walked around crying. Kitty hears his sad little cry. She walked over to him and said with a nasty smile, "No one is here? Oh no. You don't have anyone to play with." Denny's mouth was trembling. "Tha-tha-that's becau-becau-because they all died!" Kitty sat up and thought to herself. "Now I'm convinced with a number of sobs," Kitty said to herself. All of a sudden, Denny heard talking downstairs. He stopped crying. "Do my ears deceive me?" He perked up his ears down the stairs. His eyes widened. "Could it be? They're home!" He shot up in the air. It turns out that they didn't even leave. Denny's owner was downstairs helping her two kids do school. Denny ran down the stairs and darted into the classroom. "Hi Denny!" his owner called.
Later that evening, Denny ran around upstairs. "WEEEEEEEEE!" he screamed as he darted from room to room. Then he jumped up on the cat post. He sat in his cave. All the family members were getting ready to eat. Then the father of the family sat down at the table. "That's the signal!" Denny said. He darted under the table. He started to beg. "No," the father said. That didn't work, thought Denny. Next, Denny tried to limp like he was hurt. "No, Denny, don't steal just one piece of turkey," the father said again. Denny crossed his arms and tapped his foot. Soon it was bedtime. Denny had to go to bed.
THE END
I just had to post this. A few things left me scratching my head, but considering Neil is 8 and Nathan is 10, I got a good laugh out of it.. These boys crack me up sometimes!
Posted by Rena Jones at 3:11 PM