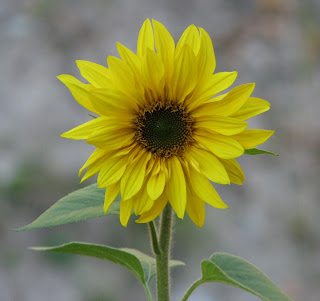 Fall has always been my favorite season. Growing up in southern California, we didn't see much of a seasonal change. Most of the trees I grew up around were live oaks, orange orchards, and avocado groves. None of those are very fall-like. Even so, it has always been a magical time for me. I will never forget October 2006 when we left California behind and came to Montana. The aspen and birch leaves were yellow. The breeze swirled the leaves around the roads as we drove. It felt surreal to me, like something I'd only seen in movies. And yet, here we are in the middle of autumn now. All our aspens and birch have turned yellow and the lawn and driveway are covered in fallen leaves. Very soon the western larch trees will turn yellow, which is pretty spectacular. I'd never seen a pine tree that had yellow needles until I moved up here.
I just took the picture of the sunflower. Most people think of sunflowers and relate them to summertime. These, however, were planted by the squirrels. They'd take a sunflower seed from my birdfeeder and plant it in a pot I had peppers growing in. They got pretty big, so Rick replanted them in another container. They're just now starting to open up. So far, there are two flowers, but I think there are at least three more in the pot. I'm hoping they open up before we get our first frost. The funny thing is that they are black-oiled sunflower seeds. I didn't think they'd grow like other seeds.
We also planted tomatoes this summer. The plant really took off and is covered in tomatoes right now. However, most of them are still green. We've heard that's common for Montana and it helps to pick them and put them in paper bags to ripen. I was just going to do that today when I realized the warm week we've had is helping them along. They're starting to turn red finally. Can you believe it? On the last day of September! We're due for a gorgeous weekend too, so I'm going to leave them on and see if they ripen even more. It's supposed to be 80 degrees on Saturday, so that should help them ripen a little more. We're hoping to get up into Glacier National Park this weekend as well. It's going to be a beautiful weekend!
What is your favorite thing about fall?
Posted by Rena Jones at 6:01 PM