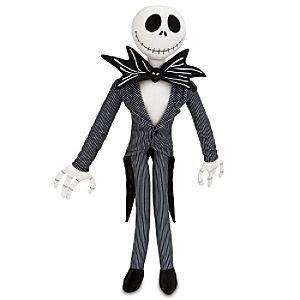 As some of you know, I'm a huge fan of The Nightmare Before Christmas. I'm part of that weirdo cult who collects memorabilia from the movie, too. My iPod holder has Jack Skellington on it, as do four of my coffee cups. I also have several purses, backpacks, totebags, belt buckles, tee shirts, figurines, and ... well, you get the idea. I'm a nutcase. Tim Burton, in my opinion, was a genius when he wrote this story. What other movie gets a full run from Halloween all the way through Christmas? It's a marketing dream!
I'm in my mid-40s and it always cracks me up when teenagers stop to tell me they like my sweatshirt or something else that has NBC on it. The following for this movie is huge. I was reading about Jack the other day and found some pretty interesting things on him. The voice of Jack was done by Chris Sarandon, who played Prince Humperdinck in The Princess Bride. The singing voice of Jack was Danny Elfman. For years, I've loved Danny Elfman's work, not realizing he used to be the singer for Oingo Boingo. Jack Skellington also has some movie cameos ...
In James and the Giant Peach, Jack appears as the captain in the pirate scene. He's even referred to as Captain Skellington.
In Beetlejuice, Jack's head appears on top of Betelgeue's hat.

In Sleepy Hollow, Jack's scarecrow outfit can be spotted in the open scene.

In Coraline, Jack's face appears in an egg yolk.

In The Princess and the Frog, Jack's silhouette is shown in one scene.

Pretty cool stuff. Anyway, I'm off to walk on my TreadClimber. I've been listening to The Nightmare Before Christmas soundtrack lately. Go figure.
Posted by Rena Jones at 12:12 PM