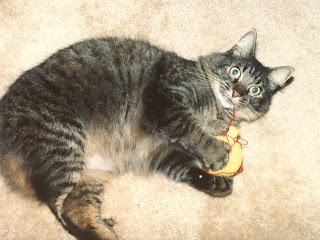 CJ
1981-1995
It's hard to believe it has been 15 years since I had to put my beloved cat, CJ to sleep. He was in the final stages of renal failure back in 1995. I had him 14 years. When he was about 6 months old, he was hit by a car and was given a grave prognosis. I opted for surgery although we weren't sure was going to be successful. His femur was broken in three places, his hip was fractured, and he had a pretty bad concussion. After a long battle, we got him healthy again. Those following 13.5 years with him were worth way more than the cost of the surgery. I still miss him terribly.
Posted by Rena Jones at 3:37 PM