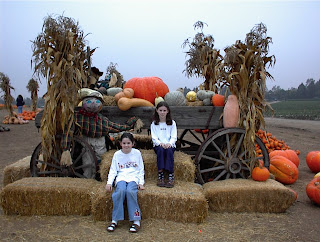 One of our favorite things about Halloween has always been a family trip to the local pumpkin patch. When we lived in California, there was a huge one along Highway 101 in Ventura. We went there every year. We'd put the kids inside a wheelbarrow and roll them around the area looking for those perfect pumpkins. Sometimes we'd go on the hayride that went around the farm. It was pretty fun.
It's hard to believe, but there is only ONE pumpkin patch for the entire area I live in now. It's a really cool place because it has all sorts of things for kids to do -- trikes to ride, hoppity-hops to bounce on, a train ride, farm animals to pet, and so forth. It's a great place. It's also run by a family of homeschoolers and the kids take part of running the patch to learn about various things. The only drawback is that you have to pay a fee to get in. It's not much, but for a family of 4-6 people, that can add up. And, that doesn't include the cost of the pumpkins. The one year we did go, we got there too late and there were literally no good pumpkins left. We ended up buying ours at a local produce shop instead.
Times are hard right now and we couldn't afford to do that this year, so we didn't make it to the pumpkin patch. We did get four great looking pumpkins for $3.88 each at Walmart, but it's just not the same as going to a patch and searching for one. There's not too much I miss about California, but I guess I can add that big, open pumpkin patch to my list. It's just so bizarre that for this entire valley, there's only one patch. Of course, you can buy pumpkins everywhere, so it's not like there is a lack of them. It's just not the same, if you know what I mean. Perhaps in the spring, we can try to plant our own pumpkin patch. That would be fun! 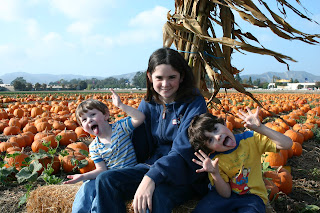