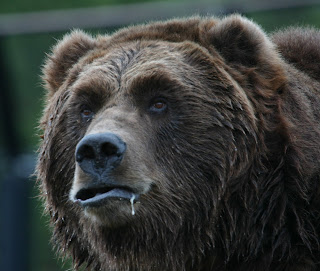 Ugh -- I had another one of my bear dreams early this morning. Most of the time I dream about black bears. It's probably because I see them more often. This time it was about a grizzly -- a very big grizzly. It looked just like the one in this picture that I took at the Grizzly & Wolf Discovery Center in West Yellowstone, Montana. I have this picture framed on my wall downstairs and I was just looking at it a few nights ago. Maybe that's why this was the bear in my dream. I have a hard time looking at it with the drool -- shudder.
It was awful. All of a sudden, this enormous grizzly comes bolting through a door where Neil is on the floor. Rick is next to him. The grizzly charges towards Neil. He's 8, by the way. For some reason, I had a slice of American cheese in my hand, so I tossed it in front of the bear -- wrapper and all. The bear went for it and Rick grabbed Neil and we scrambled out of the building. The next thing I know, we're in a car backing up down a hill. The hill is too steep, so the car topples over and flips backwards. It does this two times, and it flips from front to back, or longways. I'm yelling at Rick -- not sure what I'm saying -- and he's trying to get the key back into the ignition. He finally does and we drive off. The next thing I know, we're in a grocery store with a bunch of people and for some reason, we feel safe there. Weird.

I know it sounds stupid, but it freaked me out. The first thing I did was turn to look out the glass doors in my bedroom. I can see the deck pretty well at night when the blinds are open. I was glad to see no bears, but soon after I got that horrible surge of adrenaline that makes you feel cold all over. I hate that. I stayed awake for awhile, not wanting to go back to the dream, which sometimes happens to me. Grizzlies are scary up close -- even in dreams. I'm sure all this has to do with that picture as well as my new novel, which has grizzlies in it. I understand Rick and Neil being in it, as well as flipping the car in a panic to get away. I am, however, not quite sure where the American cheese fits in. Maybe because Neil eats that a lot?
Posted by Rena Jones at 7:42 AM