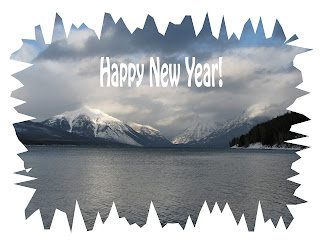 Boy, that's a strange looking number, isn't it? I hope you all had a nice New Year's Eve and Day. I also hope that it was a safe one. We stayed home, which is what we usually do. I got so used to Rick working these holidays back when he did patrol that we never really got into the party scene once he started having them off. That's okay, though. I'm not much into the party scene anyway.
I was trying to come up with a New Year's Resolution recently. Since I've been dieting and exercising regularly since October, I figured those wouldn't count. I've lost 36 pounds since October 1st, so that's definitely keeping me motivated. But, I wanted to think of something to do for a resolution, so I narrowed it down to two things -- learn to crochet or play the harmonica. I know, I know -- what two very odd choices, huh?

I've decided I'm going to teach myself to crochet. Well, I'm going to at least try and make an effort to learn. Next time I'm up in town, I'll buy a how-to set and maybe a book or two. I've always wanted to learn how to knit, but I'm thinking I'm going to try crocheting first and see how that goes. So, that's basically it -- learn to crochet in 2011. It's not a huge resolution and I certainly won't freak out if I find I can't do it. I simply want to give it a try and see. It kind of fits my anti-party-scene personality, too. Yeah ... I'm old.

How about you -- did you make any resolutions?
Posted by Rena Jones at 1:13 PM