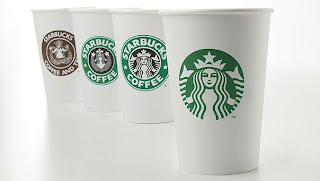 So, what do you think of the new Starbucks logo? I know what you're thinking. I'm sure you are thinking that there are way more important things to talk about than a paper coffee cup -- and you're right. However, most of those other things are either sad, infuriating, or depressing, so I'm going to talk about coffee cups and their logos. Back when I did a small, home-based desktop publishing business, I made a few logos for people so they get my attention, especially when they're changed.
Personally, I don't like the new logo. I think it looks generic and boring. The third logo has always been my favorite because it showed off the siren's hair the most and wasn't as graphic as the previous two. Yeah, I know, I can be a real prude at times. The new one just looks weird. It would be like taking all the words off a dollar bill. What's so bad about having your name on your product anyway? It sounds like Starbucks is making a lot of weird changes in the future, including being able to preorder and pay for your drinks on your phone. (((sigh))) I guess that's just the way of the times, but I still think it's weird. It's COFFEE, people -- and it used to be a dime a cup.

Oh well -- Starbucks really doesn't care what I think. And besides, all the drinks that I like are too high in sugar for my diet anyway. But, if you'd like to read something interesting about all the other versions of the Starbucks logo, click here. Interesting stuff, especially if you're into mermaids.
Posted by Rena Jones at 8:38 PM