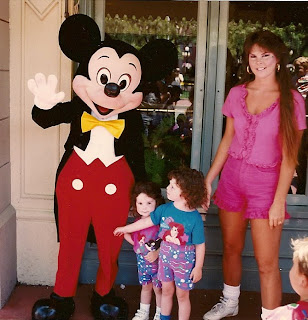 As it looks, we're going to Disneyworld in May. Rick's parents will be flying in from California and we should be landing about the same time. This is kind of my in-law's thing because they love everything Disney. Rick's mom was at Disneyland on opening day in 1955, so the parks have special meaning to her. She's been trying to get me to Disneyworld for years. Rick went with the boys and Nichelle in 2008 and they had a great time. This time it will be Rick, myself, the boys, and my in-laws. The girls are staying home to work and Nichelle might be flying out to a friend's wedding around the same time.
I grew up two hours from Disneyland, so I went there often. I pretty much know Disneyland and California Adventure like the back of my hand. Disneyworld will be a whole other story. I've never even been to Florida. I've always said when I did go there it wouldn't be for WDW, but for Everglades NP. I guess I was wrong about that because we're all booked and ready to go. It's funny how things work out. We're staying 11 nights at the Wilderness Lodge, so that will be nice. The hotel is modeled after the northwest national park lodges, so I guess I'll feel right at home! The hotel even has a geyser. Okay, so it's not real, but I'm promising to behave myself and not make any snarky comments about it.

Having been around such a Disney loving family, I've always been surrounded by books and brochures about Walt Disney World. This is the first time I've really looked at them though. I have to admit, it's daunting and overwhelming. The parks look huge, so I'm trying to read as much as I can before we go. I think we're going to try to spend two days in each park, plus one day at each of the waterparks. I'm looking forward to the Animal Kingdom the most, obviously, and I hope to get some good pictures. The one thing I'm dreading is the Florida humidity. I can do dry heat okay, but humid is another story. I hate that sticky feeling, but I'll have to suck it up and sweat it out like everyone else.

This picture above was taken in the early 1990s. Weren't the girls adorable? We used to take them to Disneyland almost weekly back then. My ILs gave us annual passes for Christmas every year, so we took advantage of the off-season to go to the park before they started school. I think I was my goal weight in this picture -- meaning, what I'm working to get back to now. I've lost 41 pounds since October 1st. So, if I can keep this up, I should be there by May. I really have to get to my goal because I won't have anything to wear if I don't. Talk about incentive -- lose weight or go naked!
Posted by Rena Jones at 10:46 AM