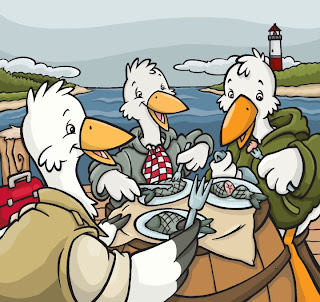 My good friend, Nancy asked me a few questions about writing, so I wanted to share them with you today. Nancy runs a home daycare business and reading to her kids has always been a big part of her daily routine. The image above is featured in my newest picture book, Stork Musters & Critter Clusters -- illustrated by Nikki Boetger and published by 4RV Publishing, LLC. That's a muster of storks eating with forks, by the way!
NANCY: Rena, what made you decide to write children's books?

ME: I was inspired to write my first children's story in 2003 after visiting Glacier National Park in northwestern Montana. My family was camping in the park and one activity we did was search for mountain goats on the rocky cliffs. A story idea popped into my head about a little mountain goat named Manny, so I wrote it down as soon as I got home. Manny the Mountain Goat is still unpublished and has been revised many times since I wrote it. I'm not sure if it will ever become a book, but I'd love for it to happen because it has special meaning to me being my first story. Mountain goats are beautiful animals and are extremely cute when they're babies. Kids love seeing them when they come to the park.

NANCY: Have you always wanted to be a writer?

ME: No, not really in the sense of being a writer/author, but I have been involved in writing for as long as I can remember. English was one of my favorite and best subjects in school. In my teens, I got involved in pen palling and that took up a huge chunk of my time. At one point, I wrote to over 100 pen pals. I got involved in pen pal newsletters and even started publishing three of my own. They weren't anything fancy, but they were fun to put together and share with people. One was for pet lovers, another was for coffee drinkers, and the last was one for Christians to find other Christian pen pals. So basically, writing has been a big part of my life, although the author stuff is still fairly new to me.

NANCY: What was the inspiration for your Critter Series, and how did you come up with the idea?

ME: In 2006, we decided to move our family from Southern California to Montana. We now live less than an hour away from Glacier National Park where my first story took place. Since our home is in a forested area, we see a lot of different kinds of wildlife near the house. Visitors include deer, moose, raccoons, squirrels, chipmunks, rabbits, a variety of birds, and even bears. I've also heard coyotes and wolves at night, although I haven't seen them. There are even mountain lions that roam around on the hill behind my house. So, when it comes to inspiration, it wasn't hard for me to write something about animals. I thought it would be fun to list the different group names, or congregations, of animals. I came up with 63 of them, so my publisher separated them into three different books. There are many animals not listed, but that's because some were very hard to make rhyme. Not much rhymes with hippopotamus!

NANCY: Do you have more Critter books in the works?

ME: As of now, there are three books in the series. Lemur Troops & Critter Groups came out in December 2009. The second book, Stork Musters & Critter Clusters was just released last month. Both of these books were beautifully illustrated by Nikki Boetger. The third book in the series will be called Pony Strings & Critter Things, although I don't have a release date. Due to personal reasons, Nikki will not be illustrating the last book. I have yet to hear who will be doing the drawings for it. Those three are the only ones I have for now, although my boys are constantly coming up with new animal groups for me to write about.

Thanks for taking the time to ask about my writing, Nancy!
Posted by Rena Jones at 3:42 PM