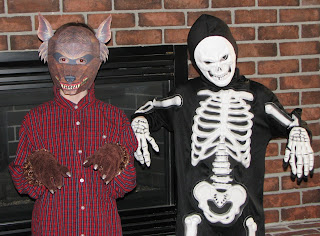 Here are my boys as they were dressed up tonight. Neil is the werewolf and Nathan is the skeleton. Last year they were both skeletons, but Neil wanted to try something new. Also last year was the first time the boys ever dressed up as something scary. They have a bittersweet love/hate relationship with Halloween. They like dressing up and getting candy, but that's about it. They're not into scary stuff at all. Nathan is probably more interested in the skeletal system than he cares about scary skeletons. The same goes for his fascination with mummies. He's really into the whole ancient Egypt thing, but not so much the scary mummy stuff that is related to Halloween. Give him a book on bones or body parts and he's a happy kid!
I'm not sure about Neil's fascination with werewolves right now, but he loves wolves. Last year he really wanted to be a werewolf for Halloween, but the mask we found was a little too freakish for him. He didn't like that the mouth was open. This year we were looking at werewolf images online when a website came up for a paper mask. That's what Neil used for his costume. We printed it up on cardstock and then my daughter Nichelle assembled it. I was really surprised it lasted through trick-or-treating, but it did. He got a lot of comments on it. And for the cost of 5 pieces of cardstock -- it was a bargain. He decided to wear a pair of my gloves and I got the idea of using some press-on nails for claws. I remembered I had a box of them in my drawer, so I cut them into a point and stuck them on. No one could tell he was a werewolf with a French manicure. Werewolf Fancy Fingers -- hee!
I hope everyone has a Happy and safe Halloween!
Posted by Rena Jones at 6:50 PM