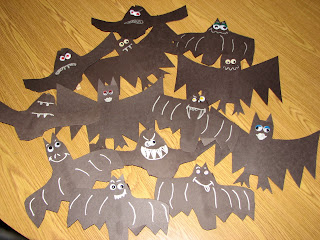 Yep ... it's Bat Week at our house! As you can see, the gang's all here. We have vampire bats, goofy bats, kissy lip bats, you name it. These are actually a special species of the unique flying mammals -- the elusive Construction Paper Clothespin Bats. They're very rare. These bats are not insectivores or frugivores like most other bats you might have heard about. These are Elmersgluvores -- a very sticky bat. It's a tacky job, but someone's gotta do it. Regardless, bats are interesting creatures. For example ...
There are two kinds of bats -- megabats & microbats.
Megabats eat mostly fruit.
Microbats eat mostly insects.
Although bats don't have good eyesight, they aren't totally blind.
Bats use echolocation to navigate and forage.
A bat's wing is much thinner than a bird's wing.
Bat poop is also known as guano.
Most bats drink water.
There are three types of vampire bats that drink blood.
A group of bats is called a colony.
Some colonies can have over a million bats in it.
Bats rarely fly in the rain because it messes their echolocation.
Three states have a state bat -- Texas, Oklahoma, and Virginia.


So, there you have it. Today it was Clothespin Bats and yesterday it was Thumbprint Bats, which were a lot of fun. I can't remember what tomorrow will bring, but I'm sure it will be batty. And if you think I made up the "Holy Flypaper, Batman!" saying, click here.
Posted by Rena Jones at 8:20 PM