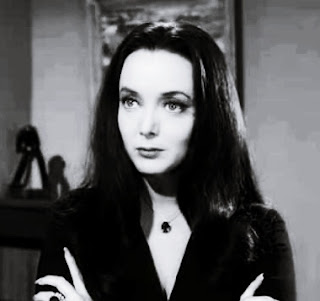 Rick and I were watching a couple episodes of The Addams Family tonight. We have series one on DVD and haven't watched them in awhile. I always loved that show as a kid, along with The Munsters. I remember watching them back-to-back after school when I was younger. I always thought Morticia was such a classy lady, not to mention stunningly beautiful. She has the most amazing eyes. It's funny too because she has a name close to my mother-in-law -- Carolyn Jones. My MIL is Caroline Jones, which is close enough. I was reading about Carolyn Jones on Wiki tonight, just out of curiosity because I really didn't know much about her. I was surprised to see pictures of her with Elvis. I didn't realize she was in King Creole with him. Here's a picture of her with Elvis ... lucky lady. 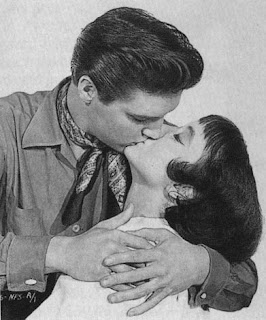 Other films she starred in were Road to Bali, House of Wax, The Big Heat, East of Eden, The Seven Year Itch, The Tender Trap, Invasion of the Body Snatchers, The Man Who Knew Too Much, How The West Was Won, several Batman episodes, Roots, and a lot more. I had no idea she had done so many films. If you were to ask me, I would have only been able to name her work with The Addams Family, but she really only did that from 1964 to 1966. She was also nominated for an Academy Award for Best Supporting Actress for her role in The Bachelor Party in 1957. She also received a Golden Globe nomination for one of the most promising actresses of 1959. Apparently, her career started to slow down after her work on The Addams Family, although she still continued to act. She was married four times. Sadly, she was diagnosed with colon cancer in 1981 and died in 1983 at the age of fifty-three.
But still ... she had amazing eyes ... like Betty Davis' eyes. Since I wasn't familiar with her work outside of The Addams Family, I went searching for a color picture of her. Her eyes were a pretty shade of blue. 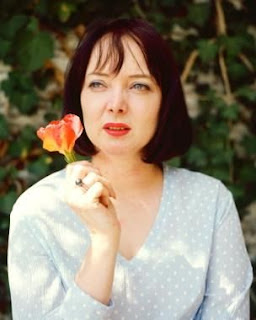