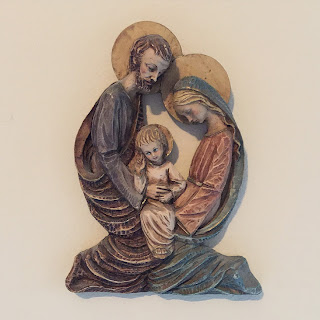 So, a few weeks ago I came across this wall hanging at the thrift store. It's about ten inches in height and pretty heavy. It says it was made in Italy on the back. With a price tag of $3.75, I knew I had to get it. I finally got it up on the wall the other day. Now many of you know I collect Nativity scenes. Most are very, very inexpensive sets. I have probably around 100 now, if you include ornaments. I get them out every Christmas and they literally take over the house. Often times Rick will stare at one confusingly and ask, "Is this new?" I've gotten pretty good at bending the truth a bit. "Oh, no, I've had that one for awhile." His idea of "for awhile" might be different from mine, so it's not technically a lie. Anyway, when he saw the new one above, he seemed a little baffled because I usually put them out for Christmas. He seems to be under the impression that they're taking over the house year-round. I don't know why ... 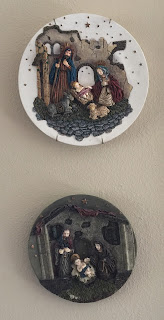 The new one is on a wall between a window and some French doors in our living room. On the opposite side are some Nativity plates that I decided to keep out all year. In my mind, the new one balances out the plates on the other side. Symmetrical balance, you know. ;) 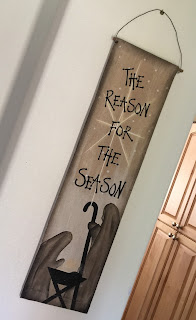 Then there's a wall hanging in my front entrance. It's definitely a Christmas one, but it fits the section of wall so perfectly that I just leave it up year round. The one below is also in the entrance area, but I don't consider it a Nativity. It's actually the Flight into Egypt. I still display it when my Nativities are out at Christmas, but this one stays out year-round too. 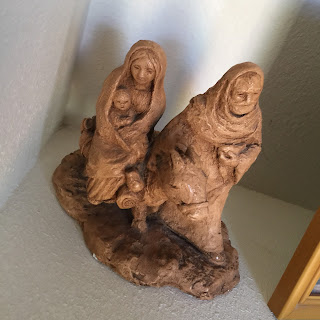