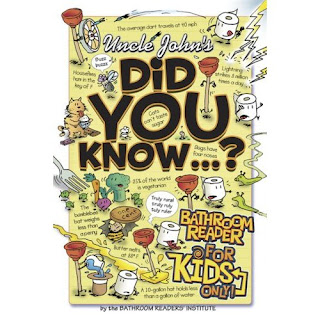 I love fun facts. I especially love funny or unique facts that most people wouldn't know. When I used to publish a pen pal newsletter for pet lovers, I often included a Did You Know ...??? section in each issue. I love that kind of stuff. The other day we were at Borders so the boys could use up their giftcards they got for Christmas. Nathan was having a hard time deciding. I picked up this Uncle John's Did You Know ... ??? book and showed it to him. He flipped through the pages quickly, put it down and continued his search. About 10 minutes later he had this same book as his choice. He began reading it when he got home and hasn't put it down hardly at all. I can't go anywhere in the house without him following me to read from it. He's totally into this kind of stuff and he's like a giant sponge soaking it all in. This is a bathroom reader for kids. For example, did you know ...

I could go on and on and on -- but I won't. You'll just have to pick up the book for yourself. Uncle John has a website here and he has a lot of these books. Nathan's playing right now, but I'm sure in awhile he'll be up here reading more interesting facts to me. As soon as I can, I'm going to snag the book from him and read it myself.