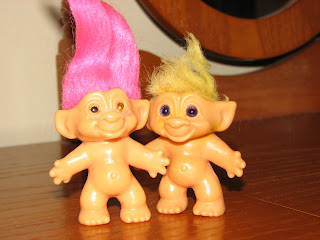 Did you ever play with trolls? I was digging through my closet the other day and found two of my old trolls. I had them packed up because the last time I left them out, the boys got a hold of them and took them in the bathtub. That's how the yellow-headed one lost his hair. It really bummed me out. I can't remember the yellow-haired one's name, but I used to call the pink-haired one Charlie. I played with trolls all the time. I even had some of the plastic carrying cases that were designed like little houses. Those were fun. My best friend in grade school loved trolls too and we'd play with them for our entire lunch break. Fun memories playing with them on the dirt hill.
Troll dolls first became popular in the mid-60s, but were originally invented in 1949 by a Danish woodcutter named Thomas Dam. It is said he couldn't afford a Christmas present for his young daughter, so he carved her this doll. It became such a hit that he started making more and selling them. Trolls became popular again in the 70s, which is when I used to play with them. I remember finding them at thrift stores and it was always a thrill to find a really old one. It was like striking gold. If you go to ebay and look for trolls from the 60s, you'll probably see a lot of bids and high prices. Some people seriously collect them. I just have these two right now. My girls had a bunch from the 80s, but I'm not sure if we still have them. The newer trolls came with fancy outfits, but the ones I used to get were always naked.
According to Wiki, a troll is a fierce member of a race of creatures from Nordic mythology, similar to the ogres of England. Trolls have been featured in fables, books, movies, even television. I remember loving the story of the Three Billy Goats Gruff when I was little, which featured a troll living under a bridge. There is a troll in Toy Story too, but it didn't talk or have a big role due to issues with who owned the rights to it. My sister-in-law married a man from Norway and acquired some very interesting trolls living there. In their heyday, trolls were considered a source of good luck and many people carried the dolls while they traveled. I wish I had kept my old trolls, but I'm glad I have these, despite the hair-loss. Do they make Rogaine for trolls?
Posted by Rena Jones at 7:02 AM