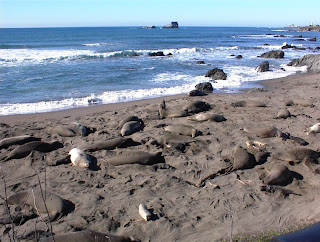 This probably isn't a good beach to sunbathe on -- it's too crowded. However, if you're an elephant seal, it's the perfect place for doing just that. I came across this picture the other day when I was adding an old CD of images onto my computer. I took this one on our way up to Big Sur on a camping trip. This is a section of beach along Pacific Coast Highway near San Simeon, fairly close to Hearst Castle. There are two kinds of elephant seals. Northern Elephant Seals live on the Pacific coast of the US, Canada and Mexico. Southern Elephant Seals are found in the southern hemisphere in places like New Zealand, South Africa and Argentina. The ones pictured here are Northern. They are fascinating to watch, but they're loud and smelly. Fights between the males can be brutal. We've seen baby seals nearly get crushed to death as males fought on the beach. Some interesting facts about elephant seals are --

Males are called bulls and the largest known bull elephant seal weighed a whopping 11,000 pounds. You wouldn't want to get in his way! They get their name from the long snout the bulls have that resembles an elephant's trunk. They are protected from cold with blubber, but at times their skin goes through a molt and they need to go on land to stay warm. This picture was taken on one of their regular haul-outs where they rest during this time. The name elephant seal got me thinking about other creatures that have another animal as part of their name. A few that I came across were --

Can you think of any others?