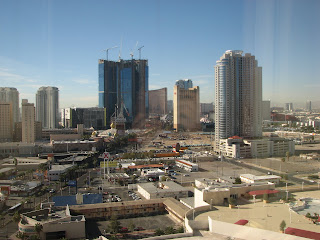 We arrived late last night and so far we haven't done much other than spend the last hour trying to get the internet connected at our hotel. This is the only picture I've taken -- it's the view from our room at the Stratosphere Hotel. I wanted to take some pictures on the shuttle ride from the airport last night, but the driver was going about 300 mph and they wouldn't have turned out. He did get us here in good time though. This is actually our second room. The first one had a view of the parking structure and was a handicapped access room. They moved us up to a nicer room on the 23rd floor. We'd have a good view of the Strip, except all these huge timeshare hotels have sprouted up blocking everything else.
For those of you who don't know, Rick & I are spending a few days in Las Vegas to celebrate our 21st wedding anniversary, which was on Valentine's Day. It's been years since we did anything for our anniversary. We got a really good rate, so we decided to take a little trip. I brought my laptop so I could post on my blog for my kids to see. I'm hoping to get some fun pictures for them. Last night we were walking through the airport and as we got onto the escalator, we heard a lady freaking out behind us. She had been on our flight from Montana and had never been on an escalator before. It was kind of funny, but sad in a way because she was truly scared. It didn't help that her husband told her the escalator will snag her toes at the end if she wasn't careful. Her eyes got all big and he started laughing. Then she began scolding him for making fun of her. I forget how small cities like Kalispell are sometimes. If that was her reaction to the escalator, imagine what she did when she got out on the Strip. Poor thing.
I'm not sure what our plans will be for today. I think we might try to see The Jersey Boys show sometime while we're here. Other than that, I don't know what else we'll do. This is the first time we've ever been in Vegas without a car, so that could be a pain. We're hoping to walk down the road a bit and catch the Monorail that runs along the Strip. I'll try to add more to this as I can. The internet was acting kind of goofy this morning, so hopefully it won't continue to be a problem. Anyway, I think we're going to head up to the top of the Stratosphere Tower and check that out soon. What do you think my chances are of getting Rick on this?
Nichelle, Nicole, Nathan & Neil -- we miss you and we'll talk to you soon.
Posted by Rena Jones at 10:57 AM