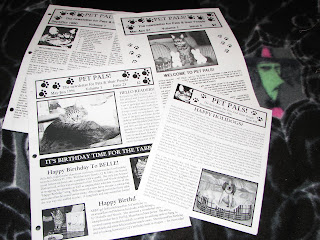 The other day I was on Facebook when Margot Finke posted a link to a blog called Pets and Their Authors. That caught my attention, so I decided to check it out. Great blog, by the way, so take a look at it if you can. Anyway, the blog reminded me of something I used to do. Back in the 1990s, I was really into writing to pen pals. I wrote to people all over the world. At one time I had over 100 pen pals. This was right about the time when we got our first computer and I was looking for something fun to do with it. I decided to create a newsletter for pen pals who loved their pets as much as I loved mine. PET PALS! The newsletter for Pets and Their People, was born. It ran from September 1990 all the way through September 1998.
Above is a picture of just a handful of issues. PET PALS! came out every 2 months. It was sold for $2 an issue and I offered single copies, half year and full year subscriptions. It was never huge, but it did well enough to keep going for 8 years. What was unique about it was that my cat, CJ was the editor. The newsletter was done in CJ's voice. It was all about pets and the people who loved them. People sent in their pen pal listings so they could find other pet lovers to write to. It also featured pet care articles, photographs, poetry, comics, contests, even a classified ad section and an advice column. We had funny titles for things such as Classy-Fido Ads, Dear Abby the Gabby Tabby for the advice column, and stuff like that.
You have to remember this was before people were into the Internet. Back then people actually wrote letters to each other. Another unique feature was that we offered pen pal listings for pets. And yes, people sent them in and people really did write in their pet's voice to other people's pets. It was a fun newsletter. I made a lot of friends through it. The hardest issue was November 1995 when I had to announce the death of our editor, CJ. That was heartbreaking and having to do the newsletter was painful. The response I got was amazing. People from all over the world, including their pets, sent cards and letters. I decided to continue publishing PET PALS! after CJ's death, but we never had a new editor. That had been his job and his alone. After awhile, I decided to call it quits. A subscriber took the newsletter over, but sadly, I lost track of it over the years. I believe there were 49 issues all together and I have a copy of each one in a binder. It's fun to go back through them because a lot happened in my life those 8 years. It was a great time in my life and because the newsletter was so whimsical in nature, I'm sure my love for writing for children is because of PET PALS!
Posted by Rena Jones at 9:04 AM