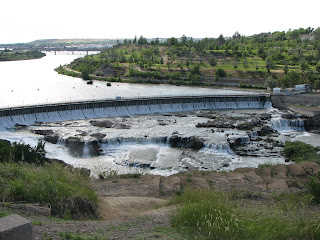 Here is a little Montana history -- on this day in 1805, during the Lewis & Clark Expedition, Meriwether Lewis and four of his companions discovered the Great Falls of the Missouri River. I was there 2 years ago for a homeschool convention. We only had time to see the falls from a distance because I had my conference to go to, but what we saw was really pretty. The waterfalls aren't incredibly high, but they were important because they marked the limit of where boats could be navigated through the river.
This is Black Eagle Falls in the picture above. It's right in downtown Great Falls, Montana. You can see the dam, the powerlines, and the bridges. Can you imagine what it looked like when Lewis came across it? Man, it must have been a spectacular sight in its pure, untouched form. Just down the road from Black Eagle Falls is Giant Springs State Park. We stopped to visit here for awhile and it was absolutely beautiful. There were 2 baby owl chicks in one of the trees and we got some wonderful pictures. This park is also home to the Roe River -- the shortest river in the world at only 201 feet. Giant Spring flows 156 million gallons of water each day and the water temperature stays at 54 degrees. There's also a fish hatchery nearby, which my boys enjoyed. While I was at my conference, Rick and the boys did some fishing in the river and had a great time. Giant Springs is pictured below. 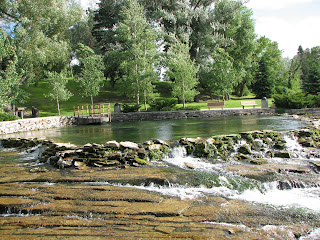 Great Falls is one of the few big cities in Montana. It's fun for me because I'm used to huge cities like Los Angeles or San Diego. Obviously, the city got its name from the waterfalls. If you click on the link, you'll see that quite a few famous people live and lived in this area. Several movies have been film there as well. It's interesting how these waterfalls right in the middle of the city. They just built the city around them. I can only imagine how beautiful the area was when Lewis and his companions first saw it. It must have been absolutely breathtaking 204 years ago.
On another note -- Nicole left early this morning for a missions trip with our church. The youth group is heading up to Vancouver, Canada, where they will participate in a week-long outreach program. If you could please keep her in your thoughts & prayers, I would appreciate it. It's a strange feeling having both of the girls gone. Poor Kitty is going to be beside herself for awhile. She usually hangs out with Nichelle, but with her in Maui, she's been hanging out in Nicole's room. Now Nicole is gone, so I'm not sure what Kitty will do. Regardless, I know Nicole will have a great experience. Nichelle took this same trip a year ago and loved it.
Posted by Rena Jones at 7:09 AM