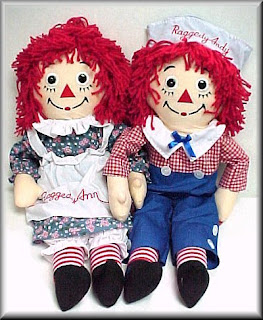 Today is Raggedy Ann & Andy Day! Did you ever have these little rag dolls? When I was little, I was really into dolls. I loved Barbies, Mrs. Beasley, Chrissy, and others. I have an old black & white picture of me on my 2nd birthday with a doll that came with rollerskates. Dolls were a big part of my life as a child. I remember going through a phase where I played with Raggedy Ann & Andy also. They were simple -- didn't have rollerskates, little eyeglasses, didn't talk, and their hair didn't get longer -- but they were fun. And now, of course, they're classics.
Johnny Gruelle came up with Raggedy Ann in 1915 when his daughter, Marcella, brought him an old rag doll. He drew a face on her and came up with the name Raggedy Ann. The book was introduced in 1918 and the doll was marketed successfully with it. Marcella died when she was only 13 years old, after being vaccinated for smallpox. The doctors believed her death was caused from a heart defect, but her parents blamed the vaccine. Johnny Gruelle became an advocate against vaccinations and used the Raggedy Ann doll to promote the movement.
Raggedy Ann & Andy were not only featured in a series of books, but they also starred in comics and television shows. They were featured in South Park, though probably not in a light Mr. Gruelle would have been too pleased about. In the Who Framed Roger Rabbit short film, Tummy Trouble, Raggedy Ann is one of the dolls in Baby Herman's room. Simon & Schuster and Hasbro claim to own the rights to the Raggedy Ann & Andy name. However, the original 1915 doll and the 1918 and 1920 books are in the public domain because of expired contracts. In 2002, Raggedy Ann was introduced into the National Toy Hall of Fame -- Andy joined her in 2007. The Raggedy Ann & Andy Museum is in Illinois and is the only official licensed museum for the dolls in the world.
My Raggedy Ann & Andy dolls are long gone, but they looked exactly like the ones in this picture. I don't know what happened to them. But over the years, and thanks to places like ebay, I have been able to get ahold of some of my old childhood toys again, like Mrs. Beasley and Chrissy. Raggedy Ann & Andy are still around and after reading about their history, I'm itching to buy a set again. I don't know why -- nostalgia, I guess.
Posted by Rena Jones at 7:04 AM