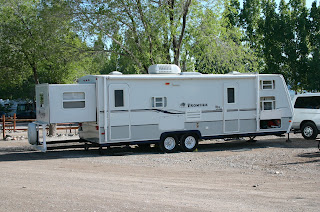 Camping -- do you love it or hate it? It seems for most people, there's no in between when it comes to how they feel about camping. I love it. I've camped since I was a baby. My first trip away from home was to Sequoia NP when I was 2 months old. Of course, I don't remember it, but maybe it's the reason I love national parks so much. My parents loved to camp. After my dad died, my mom continued to take us on camping trips. They were usually local places, but I remember having a lot of fun.
When Rick & I first started dating, we went camping a lot. It was one way to get out of the house. I remember going to Kmart with Rick one time and between the two of us, we split the cost of all our camping gear. We were really into it for a long time. Then we stopped going so much when we had the girls. I'll never forget our first camping trip with them. They were tiny. We only spent one night, but it renewed our interest in camping. We soon bought a pop-up tent trailer and that was like a luxury after tent camping all our lives. Then we moved to a 24' travel trailer. We now have a 28' trailer, which is the one pictured here. On the left you can see the queen bed slide-out. On the right you see 2 small windows (the storage flap is up here, so that looks a little funky). Those are bunk beds. There's 4 bunks all together, so the kids have their own little room. It also has a full bath, slide-out couch, and dining area. It's hardly roughing it when you have a bathtub, TV, VCR, microwave, and everything else. Maybe that's why I like it so much.
I have to admit, I miss tent camping. There's just something fun about that for me. Up here, it's a different story with bears though, so I don't know if I'm ready to do the tent thing again. I really miss the pop-up tent trailer too. We could fit that thing into any spot and even move it around by hand if we had to. We can't do that with the one we have now and we're limited to places that accommodate larger units. Camping on the beach was a blast in the pop-up, so I really miss being able to do that. But having a larger unit is fun too, especially when the weather gets bad. It's so cool to lie in bed and listen to rain hit the metal roof. I'm not sure if we'll ever go the full motorhome route. For now, the trailer is more practical with the kids. And it's nice to be able to unhook the van and leave the trailer in the site while we run around. I used to love taking the trailer to Las Vegas. The RV parks are really nice. Most people at RV parks are really nice, for that matter. It's definitely a different scene than a traditional tent campground.
We're going camping this weekend and will be leaving in a little while. We're going to Glacier NP again. We went to the east side of the park last weekend, which is 2.5 hours away, but today we're going to the west side. It's only an hour away. It's the area that we go up on weekends to kayak. The news said to expect rain, but with the trailer, that's no big deal. We'll take the kayaks anyway and just play it by ear. We've never camped in this particular area of the park, but we've visited the picnic site many times. The boys are really excited. I won't have Internet access, so I won't be back on my blog until Monday. Maybe I'll find something cool to photograph.
So, how do you feel about camping -- love it or hate it?
Posted by Rena Jones at 8:26 AM