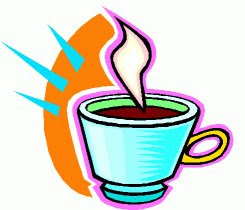 Today's going to be a long day. At 4am, I was wide awake. I got up for a cup of milk and then tried to go back to sleep. I don't know why I even bothered because I tossed and turned until after 6am. I figured I'd get up when Rick did and work on the computer for a bit. But of course, as soon as Rick got up, I fell into my deepest REM sleep, had a zillion dreams, and am now feeling like a zombie. Would you be surprised to know I took the bird feeder outside before my eyes could even focus, so the squirrel didn't get mad at me? Yep -- it's gonna be a long day, but at least Nips is happy!
So, how do you wake up? For me, it's a hot cup of coffee. I've been drinking coffee since I was nine. I know that sounds pathetic, but my mom was a nurse and worked all hours of the day and night, so coffee was a big deal in our house. My sister used to take me to school and sometimes her friends would ask her to go to Carrows or the bowling alley for coffee before school. Most of the time they ended up staying too long and ditching class. I just went along and got on the coffee bandwagon pretty early.
Since Rick leaves at 6am and I might as well be dead at that hour, we make our coffee the night before and set the timer. We used to buy Starbucks, but it's gotten so darn expensive at $7 for one of those little bags, so now we buy Colombian beans from Costco. They sell big 3-pound bags for about $11 and it's just as good. Coffee and camping have always been one of my favorite combos. Back when we tent camped, we had the little percolator type pot that we put over the fire. Hearing it gurgle always reminded me of my grandparents, who used to perc their coffee. Now that we camp in an RV, we have a mini coffee maker, so it's not a fun, but at least the smell is there. I LOVE the smell of coffee brewing first thing in the morning. When we dry camp (with no power hook-ups), we use a French press. I love that, but I'm worried it's going to break in the trailer with all the bumping around it does.
I've never been fond of instant coffee, but after awhile, my grandparents starting drinking it. I remember seeing jars of Taster's Choice on their counter. The only instant coffee I've really liked were the General Foods International Coffees. I love the Cafe Francais one. The other day I bought a jar of instant espresso by the Medaglia D'oro brand. I bought it to use in shakes, but we took it on one of our camping trips and Rick and I were both surprised how good it was. We just made it as coffee, not espresso, but it's decent as far as instant goes. Regardless, nothing is better than grinding your own beans. Huckleberry flavored coffee is awesome and so is cherry. Bigfork is just about to launch into cherry season, so I'm sure I'll be scouting around for a bag of cherry coffee. It's wonderful! Now that I've had my first cup, I can actually see a little better. You wouldn't believe how many typos I made above. I must be more tired than I thought.
In other news -- I'm organizing a book blog tour for A New Job for Dilly during the week of June 21st to June 27th. I've participated in a couple of blog tours and have had a lot of fun, so I hope mine is fun for everyone. I will be offering some sort of prize for people who take the time to follow the tour and leave comments. I'll post details as soon as I hear back from everyone that I asked to participate. I hope all of you will join us and check out the other blogs while Dilly travels around the country via the Internet. Thanks so much to all of you who have bought the book from 4RV Publishing, me, and Amazon. And thanks to everyone for their comments. Sharon posted last night that her son took the book to school and read it to his class. That just made my night! Also, in case you don't know, there is a PDF of fun activities for kids to do after reading the book. It's on the "Links" page on my website. Feel free to print those up for your kids!
Also -- Christina Farley is having a contest on her blog, Chocolate for Inspiration, that goes with an interview she did with Korean illustrator Min jae Shin. All you have to do is leave a comment for a chance to win a copy of Sty For Sale and a rice paper fan from Korea. Check it out! And finally, (I'm full of news today!) we heard from Nichelle last night. It was via IM and only for a few minutes because other kids needed to get on the computer. She's having a great time in Maui, but said she misses home. She's been gone a week today, but it feels like a lifetime. At least we know she's well and enjoying her discipleship training, so that's a big relief. Well, I think that's it for today. Off for that second cup ...
Posted by Rena Jones at 6:56 AM