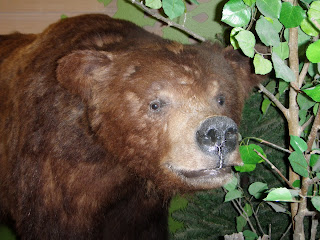 I had another one of my famous bear dreams last night. Actually, it was probably early this morning. I dream about bears a lot and it's really starting to trouble me. I know it's because we have bears in our neighborhood. They walk through the yard at night and sometimes even during the day. We haven't seen any in awhile though, but I'm sure they're out there. If not, they'll be waking up soon enough.
This dream was weird though. Usually, in my dreams I'm trying to get inside to get away from the bear, but something doesn't go right. I usually can't get the door shut or the windows locked. Last night's dream was odd because we were outside and I saw a big grizzly coming up. I yelled at everyone and then Rick ran up to take it's picture. The bear took off running. Next thing I know, I'm on this pole and the grizzly is slashing at my legs. Bizarre. Out of all the dreams I've had about bears, only 3 or 4 of them have included the bear actually touching me. Or as it was in this dream, slashing me to shreds.
I took this picture yesterday at the Fish & Wildlife Center in Kalispell. This is a grizzly, though he's dead and stuffed. They have all sorts of stuffed animals there. The boys did a little scavenger hunt trying to locate animals in the building and got a few prizes for their efforts. Of course, it's much better to see the animals when they're alive. Well, that is, unless they're in my dreams and slashing me to bits!
Posted by Rena Jones at 10:22 PM