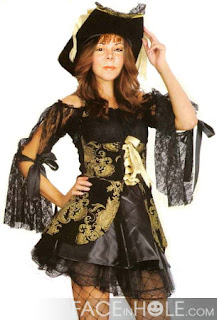 In case you didn't know, today is Talk Like A Pirate Day. I'm not very good at speaking the lingo, but this website is helpful. I have several books on pirates (mostly non-fiction) including one dictionary type book that is similar to that website. Pirates were nasty people, and still are, for that matter. It's interesting how Hollywood glamorizes them so much, but I guess they do that with just about everything.
In addition to not speaking pirate well, I certainly don't dress like one, so I have to make due with this silly picture above. Not that this is how a pirate would dress -- I'd have picked one of Anne Bonney instead, but they didn't have her for some reason. Imagine that! Face-in-Hole is a fun site, especially if you want to make yourself look like a dork like me. Back in the early 90s, I suppose I could have worn an outfit like this. Not that I would, but it would be nice to be able to, like if I had to or something. However, I am making it a goal to get myself back in shape. You know ... just in case some handsome pirate comes knocking at me door.
Posted by Rena Jones at 11:53 AM